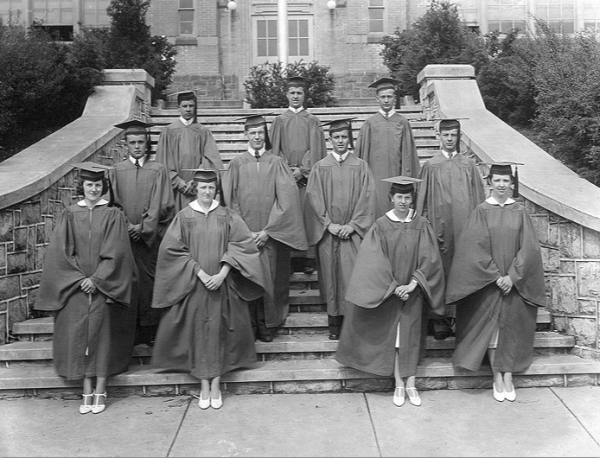 I hope you have enjoyed the last several weeks as we have gone on a journey of the high school education system here in Berks County. This idea came to me when I considered that the senior class of 2020 has a less than ideal end to their high school career. Nothing exactly like this happened before, but I considered the feelings of alumni of institutions that no longer existed. Many of the last of these alumni are in their 70s and 80s now. I imagine there were many emotions involved in being the last class to graduate from any high school.

I spent countless hours pouring over decades worth of yearbooks from almost every institution in Berks. I learned a lot looking at the bigger picture of the transformation of the education system over the course of the 20th century. Some school districts have covered their own history in various ways, but to my knowledge a county-wide overview of all of these schools has never been done before now. Below are the findings and patterns I noticed during my extensive research.

The opportunities in the earliest stages of “public” school were directly related to where one lived. The first High Schools that were free to attend were in larger populations. Reading’s first public high school was established in the late 1800s and was the first in Berks. Birdsboro was also amongst the earliest established in the late 1800s. Towns further outside the city had schools, but for them it was and would remain the age of the “one room schoolhouse” for a few more decades. Back then it was not common to attend school past elementary age, and if you did, you were transported to the urban area and likely came from a bit of money.

Free Schools were a concept produced by the state of Pennsylvania as a way to further education amongst its population. This was the beginning of state grants to townships to build their education systems. Prior to this schooling was paid for by tuition. Initially free schooling only went through elementary grades, but eventually older community children were organized and took classes as well. In some instances, like Bernville High and Mohnton, these very first high school classes were taught in rooms of private residences or community social halls; anywhere they could find space that didn’t cost much money. High school programs started as two years, then expanded to three years, and then finally established entire four year programs as enrollment increased.

In the 1920s and 30s it is apparent that towns and boroughs really took control of the education systems in their own communities. They formed school boards and built beautiful buildings with the taxes of their residents that they dedicated to the higher education of their youth. Investing in the town’s youth meant investing in the future of the town; well worth the price.

The Castles of Education

I have peeled through hundreds of images of 15+ school buildings that were built around Berks in this era. They are all independently gorgeous, but at the same time very similar in their design. Rectangular in footprint, complete brick facade, symmetrical, with the main entrance usually in the middle of the front face of the building. Not just any front door, but an ornate one, one that makes you feel important when you pass through it. Inside these buildings was lots of dark wood; floors, trim, furniture and decor. Gymnasiums included a stage, so they could also be utilized as auditoriums. Some of the gyms had balcony seating, which were useful during basketball games which took up most of the usable floor space.

These buildings almost always originally housed the 7th-12th grades. The schools were formed based on primary (1st-6th) and secondary (7th-12th) education. It wasn’t until the 1950s and 1960s that education was further broken into separate “middle/junior” and “senior” high school buildings. Very few complete secondary buildings remain. Wyomissing and Antietam still have junior/senior high school buildings, but these two districts are amongst the smallest population-wise in the county.

Graduating classes in the 1930s and 40s averaged 20-50 students for these communities. These schools were intimate places where it likely felt more like a family than a class. Everyone knew everyone. The sports and activities in these schools were heavily participated in, because if they weren’t there would be no sports and activities. Students were proud to represent their community. My impression is that those early students understood that attending these schools and participating in extracurriculars was a privilege; one that their parents and generations previous to them did not have.

The 1950s were a huge transition period for education systems in Berks. During the years 1953-1956 alone there were six new districts established across the county. As populations in these towns and boroughs grew, the school buildings built 30 years prior quickly became inadequate. School boards of neighboring boroughs and townships formed joint boards and began planning for new construction. The idea was that consolidating institutions would lessen the cost of building on the taxpayer and provide more opportunities for the students. Most of these new buildings opened in the early 1960s after the better part of a half decade of planning. Classes doubled and tripled in size as a result of these mergers, and so ended the intimacy of the small community school.

This transition is roughly where we find ourselves today. Sure, federal oversight of public schools has increased since the 2000s but the districts within our county have remained largely the same. Most still using those same high school buildings they built in the 1950s & 60s, with additions constructed as populations continued to increase.

What Happened to the Original High School Buildings?

This begs the question of what were the fates of the buildings that housed the high school kids for the best part of the first half of the century? Each article in this series covers the fates of them individually but my findings have created some interesting overview statistics regarding these buildings post-consolidation.

88% went on to serve as Elementary or Jr. High Schools for the district in which they consolidated

20% have been converted into apartment buildings or private residences

32% have since been completely or partially demolished as of 2020

I thoroughly enjoyed your series on the history of the Berks County School System. Very interesting to follow the transitions of each school district over the last century. Thank you for your research and time spent putting this all together.

Ontelaunee school was one of the first vocational schools in Pa. First east of the Harrisburg