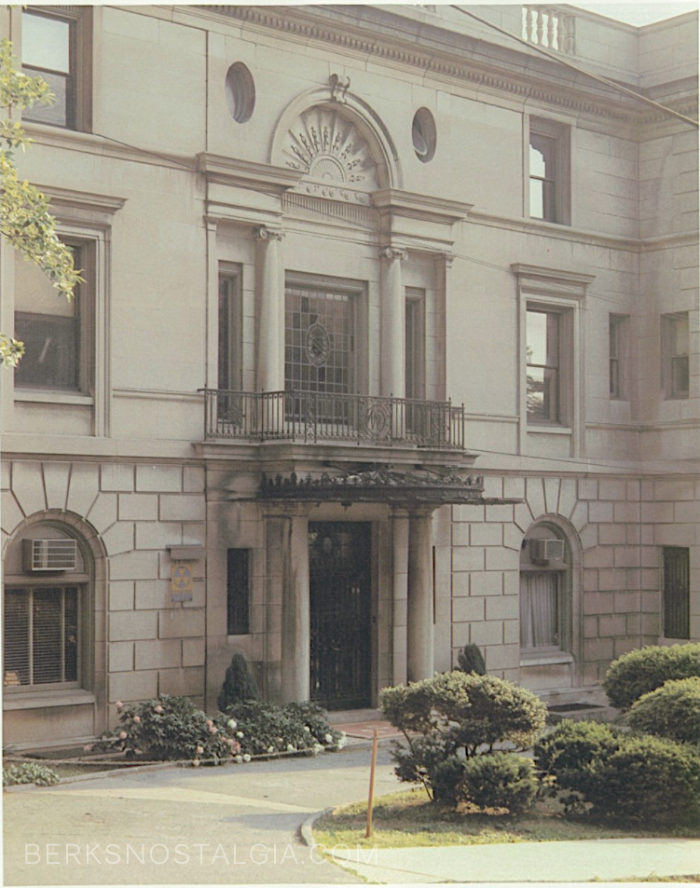 Luden’s mansion at 1400 Hill Road was purchased by the Roman Catholic Diocese of Philadelphia in October of 1939 for $45,000. Renovations were made to make the home into a school, and on January 2, 1940 Central Catholic High School of Reading opened its doors. It was the second catholic high school in the city of Reading. Central’s first class consisted of 75 students.

An addition was made to the building in 1941, including a gymnasium and science wing. In the school’s second year the enrollment jumped from 75 to 247. The addition opened September 2, 1941. The new gym was 38 feet wide and 72 feet long. This meant there was not enough room for a three-point shot from the corners.

The Man Who Built the Mansion

William Luden was a prominent business owner and confectioner in Reading. He founded his company at 20 years old in 1879. His company, Luden’s, produced the first menthol cough drops along with various other candies. William Luden gave samples of his cough drops to railroad workers, gaining the product national exposure in one of the very first examples of guerrilla marketing. He built the mansion, dubbed Bon-Air, to the tune of $750,000 which would equate to $19.5 million in 2020.

There are conflicting records on when the mansion was actually completed. Central Catholic officials stated school documents date it 1914, but local historians believe it to be 1922. Regardless, its essence was a testament to the exorbitance of the era in which it was built. An exorbitance that would collapse just around the time Luden decided to pursue retirement. Luden sold his business in 1928 to Food Industries of Philadelphia. After selling his mansion to the Catholic Diocese he moved to Atlantic City, New Jersey where he died 10 years later.

Legend has it that a ghost haunted the halls of the Luden Mansion in Central Catholic. The story is that the Luden’s had a son and daughter, living in the mansion with them. They were very strict parents and their son Billy was tired of living under their thumb.

One night the Luden’s returned after an evening out to find the home quiet. Ascending the marble stairs to their master suite area, Mr. Luden was drawn to the wooden staircase, which made its way from the second to the third floor of the home. It was there that he found his son Billy hanging by his neck in the space from the third floor down to the second.

At the bottom of the stairs there was a hand-scrawled note from Billy. It read, Father, now I shall never leave this house…and the legend was born.

One of the most popular features of Central Catholic High was the marble staircase in the main foyer. It became tradition amongst the students that only Seniors and faculty could place their feet on its treads. If you were an underclassman busted using the marble staircase your punishment was to clean it with a toothbrush. This tradition dates back to the very founding of the institution.

The first sports offered at Central Catholic High School in the 1940s included Boys Basketball, Baseball, Track, and Cheerleading. This was greatly expanded upon over the next seven decades to include Football, Girl’s Basketball, Boy’s Golf, Field Hockey, Softball, Boy’s & Girl’s Soccer, Volleyball, Bowling, and Track & Field. Central’s mascot was the Cardinal and its colors red and white.

Other activities and extra curricular’s included Band, Orchestra, May Day Celebrations and many others. In September 1963, Central Catholic had a record enrollment of 1400 students. Holy Name High School opened the following September to alleviate some of the burden on Central’s population, replace St. Peter’s Reading Catholic High, and expand the catholic school reach in Berks County.

The Cardinals played football in a 20-acre complex located at 3850 St Lawrence Ave in St Lawrence, PA. The land was donated to the school by Dominic Mauer. The stadium opened in 1948. The first game took place on September 26th, 1948, in which Central Catholic High School defeated St. Francis Prep 19-6.

In 1986, improvements were able to be made to the aging building thanks to the Diocesan Fund Drive. The addition was constructed as an atrium, in what was formerly the open court containing the shrine of the Blessed Mother. The wing added a weight lifting center, a faculty lounge, an Audio/Video room and a complete guidance center.

Central Catholic High School enjoyed a steady enrollment and successful athletic career until the 2000s. From 1983 through 1999, the Central Catholic Cardinals had a .903 winning percentage in their gym, a tremendous home court advantage. Snip Easterly, the coach of the Cardinals, said:

In the late 2000s, the Diocese’s financial and enrollment troubles caused rumors to swirl about the shuttering of Central Catholic High School. Rumor became reality in 2011. This news broke Cardinal hearts all over the county of Berks and beyond. Underclassmen would never get their moment on the marble staircase and Alumni would never again have a home for their Alma Mater. The end of a 70 year story was in sight.

In 2015 Plans were unveiled to use the old Central Catholic high as a Berks Arts Academy Charter School. It was originally expected to open in Fall of 2016 but the plans were pushed back. As of April 2020, the school hadn’t even received its charter yet. The old Luden Mansion remains vacant.

Alexa: I have thoroughly enjoyed your high school series. I have one brief comment to make concerning Reading Central Catholic. The founding of Central Catholic was a project of the Archdiocese of Philadelphia. The Allentown Diocese was not founded until January 1961 when it was separated from the Archdiocese of Philadelphia.
Best wishes to you.
Jake Dailey

Thanks for the clarification Jake! I have amended that info in the article. Thanks for reading!