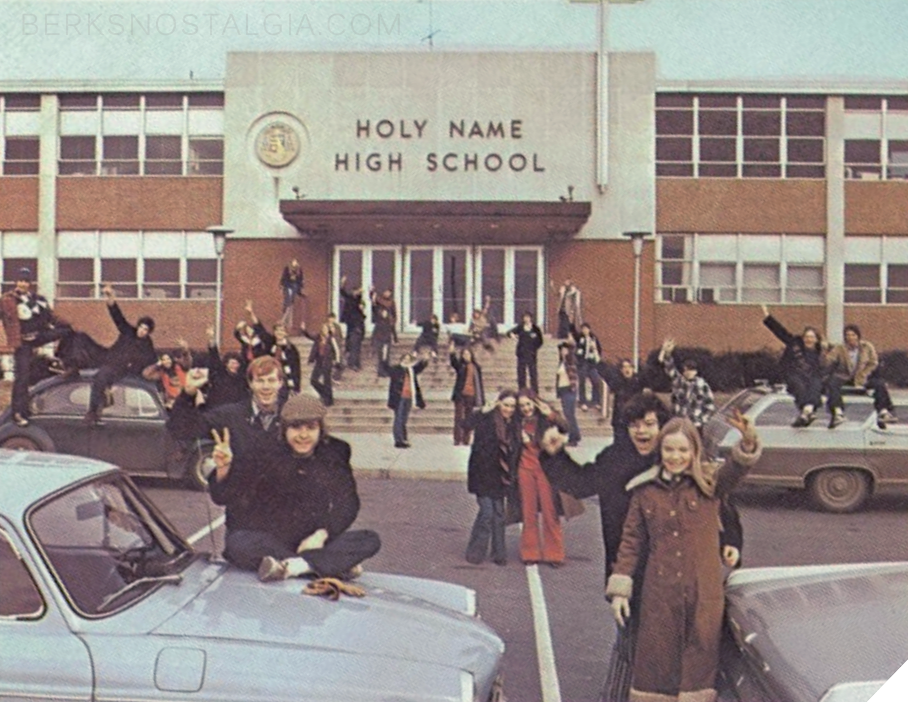 Holy Name High School’s history is directly entwined with the first catholic high school institution in Berks County; St. Peter’s Reading Catholic High. In the late 50s and early 60s enrollment at Reading Catholic High was declining, as it did not have the space or facilities it needed to attract new students. During this same time Central Catholic’s population was booming; a record 1400 students attended Central Catholic the year before Holy Name opened its doors.

It became apparent to the Roman Catholic Diocese of Allentown that Berks County needed a new institution to meet the needs of the population. Planning for Holy Name began in 1962. The name of the school was chosen as a tribute to the members of the Holy Name societies in the diocese, who campaigned for the funds to build the high school.

A parcel of 35.6 acres was purchased in Reading at 955 East Wyomissing Boulevard. The brand new $1.2 million dollar state-of-the art building was dedicated on August 30th, 1964. In September of 1964 Holy Name High opened its doors to 566 eager students who mostly consisted of former Central Catholic pupils; those who lived west of the Schuykill River were sent to Holy Name to be its first student body.

A Series of Improvements

In 1986, improvements to the two-decade old building were made possible with the financial assistance of the Diocese of Allentown. An addition to the building was built next to the gymnasium. A ticket booth for events, a athletic weight room and two storage closets were also included in this addition.

The next year a multimedia communications center was built on the campus and introduced the ability to video taping programs and a CCTV station used to air daily morning announcements throughout the school.

Improvements were again made in 1997 and were completed over the course of the next few years. They included a state-of-art computer wing, an addition to the library and new computers, a new admin building, a brand new auditorium that seated 800 persons, a new weight room and a television studio. Also included was an entirely new athletic complex consisting of tennis courts, baseball and softball fields, field hockey field, a football field which also serves as a soccer field, and an all-weather track. At this time they also doubled the size of the parking facilities to meet the demand for the growth Holy Name was experiencing.

In February of 2011 news of the merger of Holy Name and Central Catholic was released in letter form from Bishop John O. Barres and the Allentown Diocese shortly after school let out for the weekend. Holy Name would be no more, the newly formed school was to be named Berks Catholic High School and take the place at Holy Name’s site. The news was shocking to some, even though financial and enrollment problems were known and cited as the cause of the merger. At the time Holy Name had 453 students and Central Catholic had 257 which created a new student body of 710.