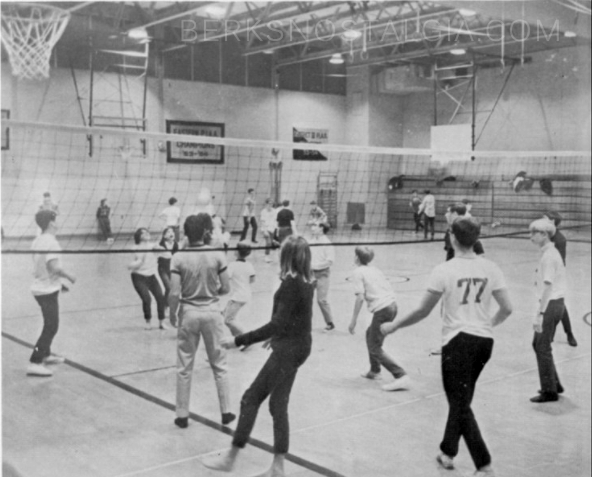 The original Mt. Penn School building was the precursor to Mt. Penn High School and was built in 1885 at 24th and Grant Streets. By 1923 there were 8 elementary grades and 4 high school grades in the building with 240 elementary children and 70 high school students. It had been outgrown and a new building needed to be built. The building continued to serve the district as Mt. Penn Elementary School until 1969.

Mt. Penn High School as most remember it is located at North 25th Street and Filbert Avenue in Mount Penn. This High School building was first occupied by classes in January 1924, when the enrollment was around 65 students. To accommodate the quickly increasing enrollment, an addition was added in spring 1928 and occupied in September of the same year. A second addition began in the fall of 1930 and occupied in February 1931. In 1934 yet another addition was constructed, which included additional classrooms, a large library, a manual training shop, a typing room, a food laboratory and a sewing room. At the time of this addition in 1934 the total enrollment in Mt. Penn High School was 371 pupils. By 1936 is was 430 pupils and it served students in 7th through 12th grades.

Mt. Penn’s school colors were orange and black, and their mascot was the “Mountaineer”. The school never produced a football team but had a very successful Boy’s Basketball team for much of the 50s, 60s, 70s and 80s. The Mt. Penn High School’s Boy’s Basketball team won the Class C state Championship in 1968. Other activities included Boys’ Soccer, Field Hockey, Girl’s Basketball, Cross-Country, Cheerleading, Gymnastics, and Bowling.

Mt. Penn High School underwent another considerable addition in the summer of 1958. An entire new wing was constructed with a new cafeteria, gymnasium and several new classrooms.

In 1975, Stony Creek Middle School was constructed off of Carsonia Avenue on the site of the former Woodrow Wilson Elementary School building. It housed 5th through 8th grades. However, just eight years after opening it was closed due to low enrollment. The 5th & 6th graders headed back to the Elementary School and 7th & 8th graders back into Mt. Penn High School. The then-still fairly new Stony Creek Middle School sat unused for 7 years.

Mt. Penn High School was closed in 1989 and all students were moved into the Stony Creek Middle School building; renamed Antietam Junior/Senior High School. A wing was added to accommodate the home ec. rooms, science rooms, language rooms, and English rooms, shop, art room and business offices. It still serves as the Junior/Senior High today. After losing the oldest students in the district, the Mt. Penn High School building sat vacant for over a decade. It was originally sold by Antietam School district to a developer who planned on renovating the building into apartments. However, due to zoning issues and not enough room for parking those plans never came to fruition. Eventually the district bought it back and turned it into a Primary School, which it still serves as.

Your stories are always interesting but seem like they need just a little more research, especial;ly when it comes to sports. The Mt Penn Basketball teams won state championships in 1971 and 1972, in addition to the 1968 Title. Incidentally, they had only one loss during the 67-68 season, losing against Daniel Boone.