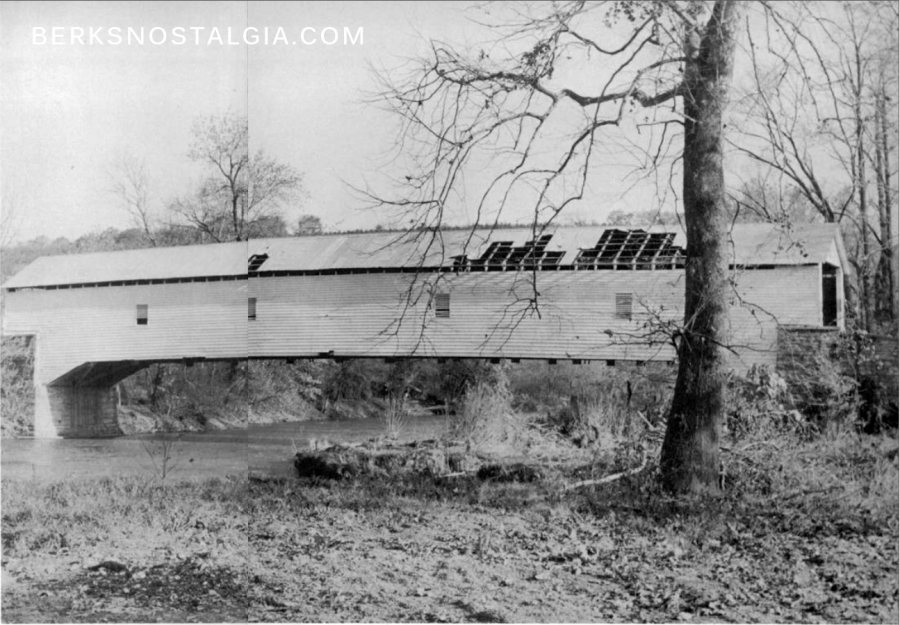 The area around the mouth of the Cacoosing Creek into the Tulpehocken Creek was settled and industrialized by the Van Reed Family. They were dutch immigrants who came to America around 1750 and settled around this creek in the early 1800s. Over the course of the 19th century the family owned at least three paper mills, a wool mill a saw mill and a union canal warehouse all along the Tulpehocken & Cacoosing Creeks.

There was once a wooden covered bridge that spanned 144’ over theTulphocken, which was built by the Van Reed family in 1837. It was one of quite a few covered bridge along the Tully, the only left today being Wertz’s red bridge just down the road. You can still see the stone footing of the Van Reed bridge on the opposite side of the creek bed when standing on the current Van Reed Bridge. The bridge saw transition from horse and carriage travel to the automobile, but its fate was ultimately decided by a truck.

In 1959 a 5.5 ton tractor trailer carrying 16 tons of shingles attempted to pass over the 4-ton limit covered bridge. The truck crashed through the decking leaving the bridge with extensive damage. They did partially repair the bridge, but ended up removing it completely in 1964 after deeming it unsafe.  The Road to Nowhere was also built around this time, which created an alternative route to the Van Reed Covered Bridge and likely factored into the choice to dismantle it

The Paper Mill was built in 1825 by Henry Van Reed. It is believed to be one of Spring Township’s oldest buildings. The Van Reed family owned and operated it for 70 years until 1896, when it was sold outside of the family. Since then paper mill companies have been in and out.

Directly next to the mill is a dam, which was used to power the turbines that made the paper. There is an organization called American Rivers that’s sole purpose is to secure funding for the removal of dams just like this one at the Van Reed Paper Mill. When dams like these were formed in water ways all over the country, industry was revolutionizing the way society lived, but the damming also caused real issues for the ecology of the creeks. Habitats were lost for native species and formed for species that naturally would not have been there. Now almost 200 years have gone by and most of these dams are no longer in use but still altering the ecology of the creeks. American Rivers is removing the dams and restoring the creeks to their natural state.

In 2018 an article ran in the Reading Eagle stating that the funding was finally approved to remove the dam. On July 27th, 2020 a piece written by a woman who is VP of communications for American Rivers was published; She’s originally from the area and knew she had family ties to old mills, so when she saw that her organization was preparing to destroy a dam in Spring Township she reached out to her mother. Turns out she’s the 4th great-granddaughter of Henry Van Reed.

In a strange coincidence, the ancestor of the man who built the dam is going to be partially responsible for its demise. Her article stated the final preparations are being made and this dam will be gone within the next few weeks or months.

I drove over that bridge more often than I can count. The Van Reed Inn was just on the other side from the paper mill.

When I was a young child my family crossed the Van Reed bridge regularly to visit friends nearby. This was in the early 60’s. The short stretch of the Road to Nowhere was being constructed at that time and it crossed the Tully. That helped determine the fate of the covered bridge either being more properly repaired or replaced with a new structure. And the Wertz’s Red Bridge was forever closed to vehicle traffic. I appreciate the photos of the Van Reed bridge, they seem to be few and hard to find.

Does anyone know anything more about this VanReed family.My mother was a VanReed and lived in indiana?