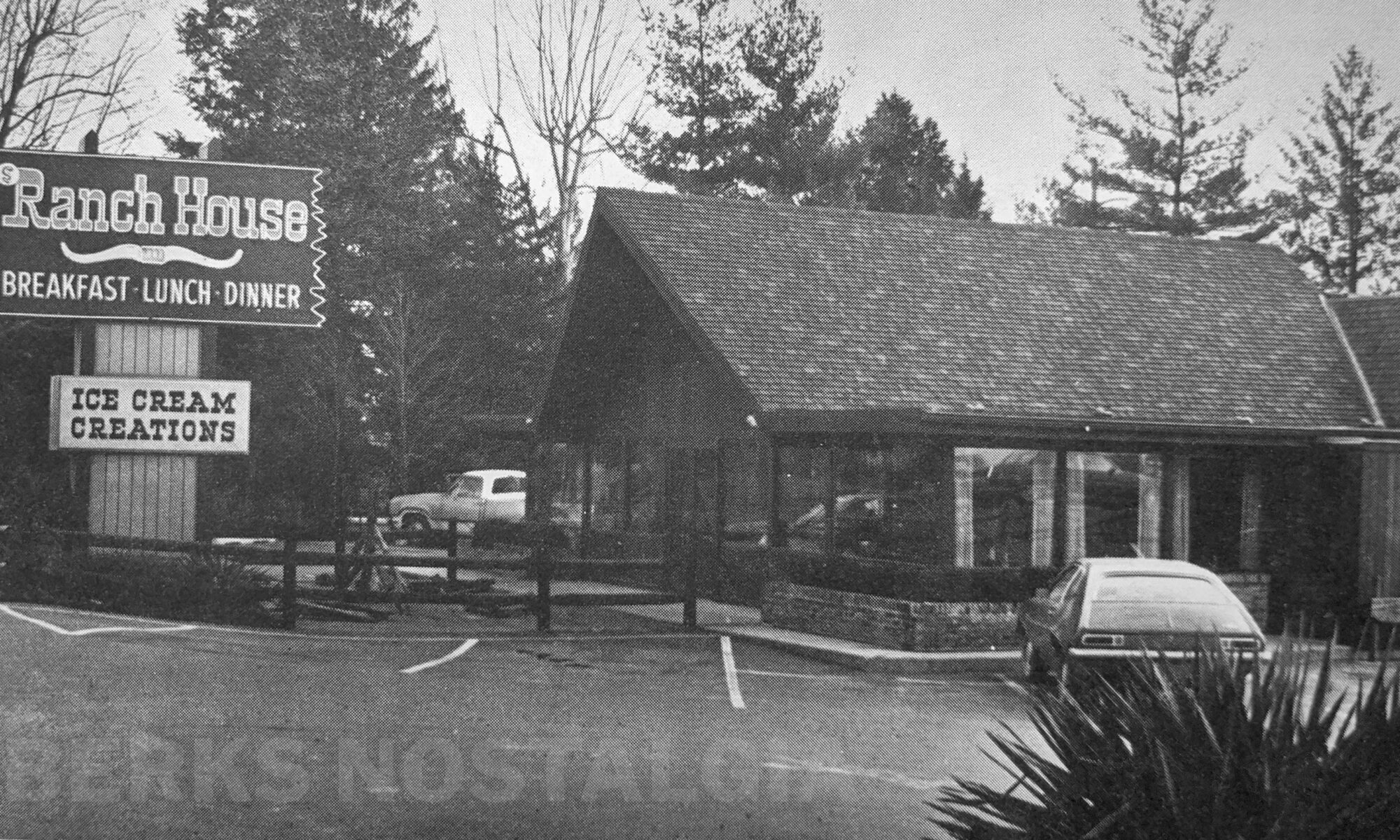 The building was built in 1969 as a Schell’s. It replaced the location that was further east down Penn Avenue which was a casualty of the bypass construction of the early 1970’s. It served fast food and ice cream, similar to its sister location on Fifth Street in Muhlenberg. Renovations were completed in 1973 when it officially became the sit-down western themed establishment.

Ranch House offered a variety of options in soups, salads, sandwiches, but also steaks, seafood and a long list of entrees. Specials rotated and were always viewable on the dry-erase board on the front wall of the restaurant. Their ice cream creations were iconic, particularly the Bull Dog. Their breakfast menu was also vast and beloved by the community.

The Ranch House has been hit by a few vehicles over the years, one making its way partially into the dining room. In November of 1996, it suffered a fire in the kitchen that resulted in it being closed for quite a few months. At one point, owners weren’t sure if it would come back from the fire, but the community rallied and the establishment once again resumed business.

Nearly five decades after opening the interior is largely unchanged. Besides bathroom and kitchen upgrades, all dining room decor has remained consistent since 1973. Even the menu hasn’t changed much. Co-owner Scott Schell credits his staff and customers for the Ranch House’s longevity and success.

Ranch House has typically been known to be patronized by senior citizens, but really, nearly everyone from the south-western side of Berks has some distinct memory of the Ranch House. The constant line out the door of those waiting for a seat the entire week leading up to closing day was a testament to that.

So much changed in a half century, but the Ranch House didn’t. The experiences we had beneath its hokey wagon wheel lights connected us to our friends, children, parents, and grandparents. For that we love it. For that we will most certainly miss it.

I grew up in Wyomissing and have very fond memories of the original Schell’s that was just up the road from the old “Iron Bridge”. I was saddened when I recently learned that the Ranch House will be closing. It has been our default “spur” of the moment place to go and will be missed for sure. I’ll just have to be satisfied with the occasional trip out to Schell’s on the 5th Street Highway. That location does allow for the short walk next door for Cho Cho’s !!!!
I know that David Proctor usually responds to any old Wyomissing nostalgia on this site. David if you’re out there track me down and we can meet for lunch(at Schell’s 5th St. of course).

Just want to say how much I enjoy reading your articles 🙂

Thanks so much Yvonne!

When was the iron bridge torn down?

Thanks Alexa! I appreciate reading your articles, & I especially enjoyed reading this one. I am sorry to see that the Ranch House is closing. I have had many meals there through the years. I had my final breakfast there this morning, and it was wonderful. (Thanks Ranch House for all the years you’ve been open. You will be missed).

We would go to the original Schell’s near the iron bridge for their hamburger bar b cue instead of every body else’s run of the mill hambugers. I live in York now, and anytime I get back to Reading, I still go to Schell’s.

I’m sad to hear about this. The ice cream was the best, and I always made it a challenge for myself to eat the whole thing!

Great place – sorry to see it go. Actually, I grew up very close to the first West Lawn Schell’s and was happy that they just moved down Penn Ave, when the bypass work made that location untenable. Later as the West Lawn Schell’s became The Ranch House, it was clear that a lot of the food had that Schell’s touch – the burgers still had the tasty charcoal flavor. Of course, the menu expanded and made the place even more enjoyable as a dining destination.

Alexa, you did a great job with this article and especially the Youtube video. The iron bridge was removed in 1977 for the bypass changes. Nearby was the former Evans one room schoolhouse. Does anyone have a photo of this? Note that it had both the opening for cars and a separate opening for the trolley to pass through. My wife and I lived at the Ranch House and will miss it greatly along with the many folks we got to know there over the many years. It was like family. Does anyone remember the cape cod style house that sat there and was used as a realtors office prior to Schell’s replacing it and Topp’s 19 cent hamburgers where the bagel shop is now? The old Schell’s was located slightly west of the entrance gateway to Wyomissing Hills and there was a laundromat next to it.

I do remember the Topp’s and the cape cod. I lived down the hill in Sinking Spring.