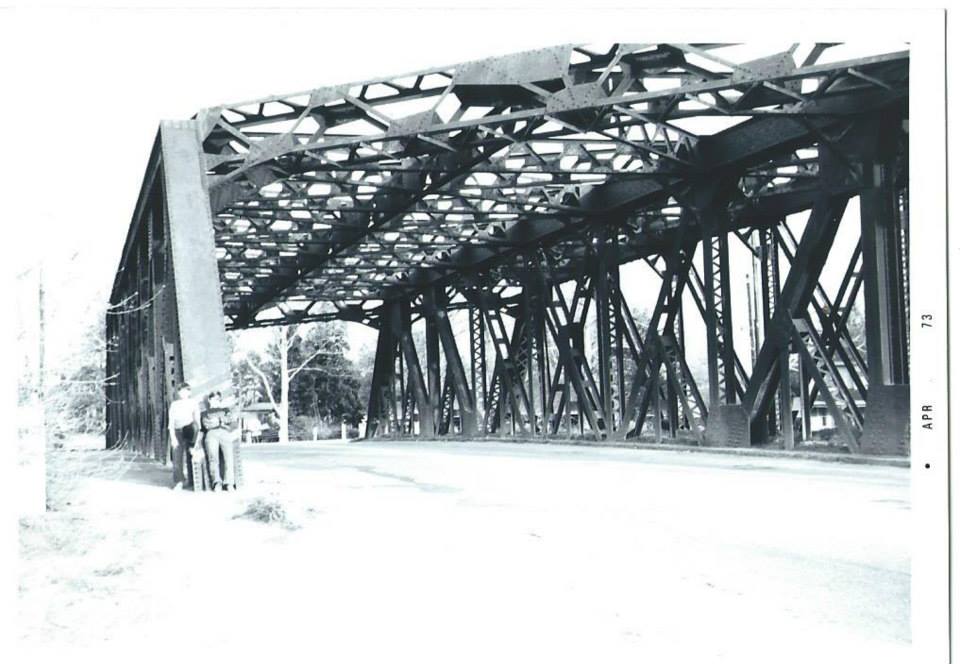 This iron bridge was on 422/Penn Ave connecting Wyomissing and West Lawn. It was built in 1926 and replaced an older, smaller iron pony-truss bridge. Only two “overhead bowstring bridges” like it are known to have survived in the state of Pennsylvania.* One ended up being placed on the Horseshoe Trail at Scarlets Mill in Robeson Township. These smaller pony-truss bridges needed to be replaced in the early 1920s because railroad regulations changed to allow double-stacking of rail-car containers. Newer trains were unable to fit under the spans of the old pony-trusses that were built in the 1800s. Their wooden decking also made them a fire hazard.

There were railroad tracks on the side of the bridge from the era of the trolley. The trolley used to pick up workers on Penn Ave in West Lawn and take them into Reading, crossing the old iron bridge on the way to and from. This was a main method of transportation used by common folks for a majority of the first part of the 20th century when the automobile was still being made widely affordable for the working class.

It was dismantled in the early-1970s to make room for the new bypass. Attractions you may remember near here included the Queen of the Valley Restaurant and the old Schell’s Ice Cream location.

If anyone has photos of any of the buildings that were torn down to build the bypass I would love to see and share them. [email protected]a.com

*Informational contributions to this article made by Gregory D. Pawelski & Karin Long

Thanks for sharing this. I really like the Reading Railroad pictures.

Nice – thanks for posting.

I remember the old Queen of the Valley, and Schell’s.I hope someone has pics. I also
remember when 422 was a two-lane blacktop road running past the newly-built Berkshire Mall.

[…] Valley Diner was opened in 1954 at 1730 Penn Avenue in West Wyomissing, and sat just down from the old Iron Bridge that crossed the railroad. It was owned and operated by Charles and Gloria Schwambach, who also […]

Does anybody know when and have any pictures of the old Wyoming bridge was taken down for good?

Our house on the Penn Avenue spur was very close to the Iron Bride, and as boys we used to play under it. There was a kind of a surreal moon landscape there with dunes and craters. Early “Truth or Dare”? We used to dare one another to run naked across the tracks and back.

My parents moved to Wyomissing in June of 1967. We lived on Evans Ave. one block down from the bridge. As a kid we used to walk across the bridge to go to West Lawn. Remember when they closed it to take it down.

[…] It was opened and originally owned by Charles Schwambach, who also owned the Queen of the Valley Diner, located east up Penn Avenue by the old Iron Bridge. […]

Lived up on Grand blvd. Moved out in ’68. Anyone remember the old foot bridge across the tracks, further down towards Schells. Was on it when the old steam locomotive ran down the tracks (don’t remember the engine number) Mom used to send Tom Sturgis pretzels to the guys in Viet Nam. How about sledding on jack rabbit hill? Wonderful neighborhood..

Hey David,
You can find an article on the footbridge here: https://berksnostalgia.com/west-wyomissing-foot-bridge/
Thanks for sharing your memories!