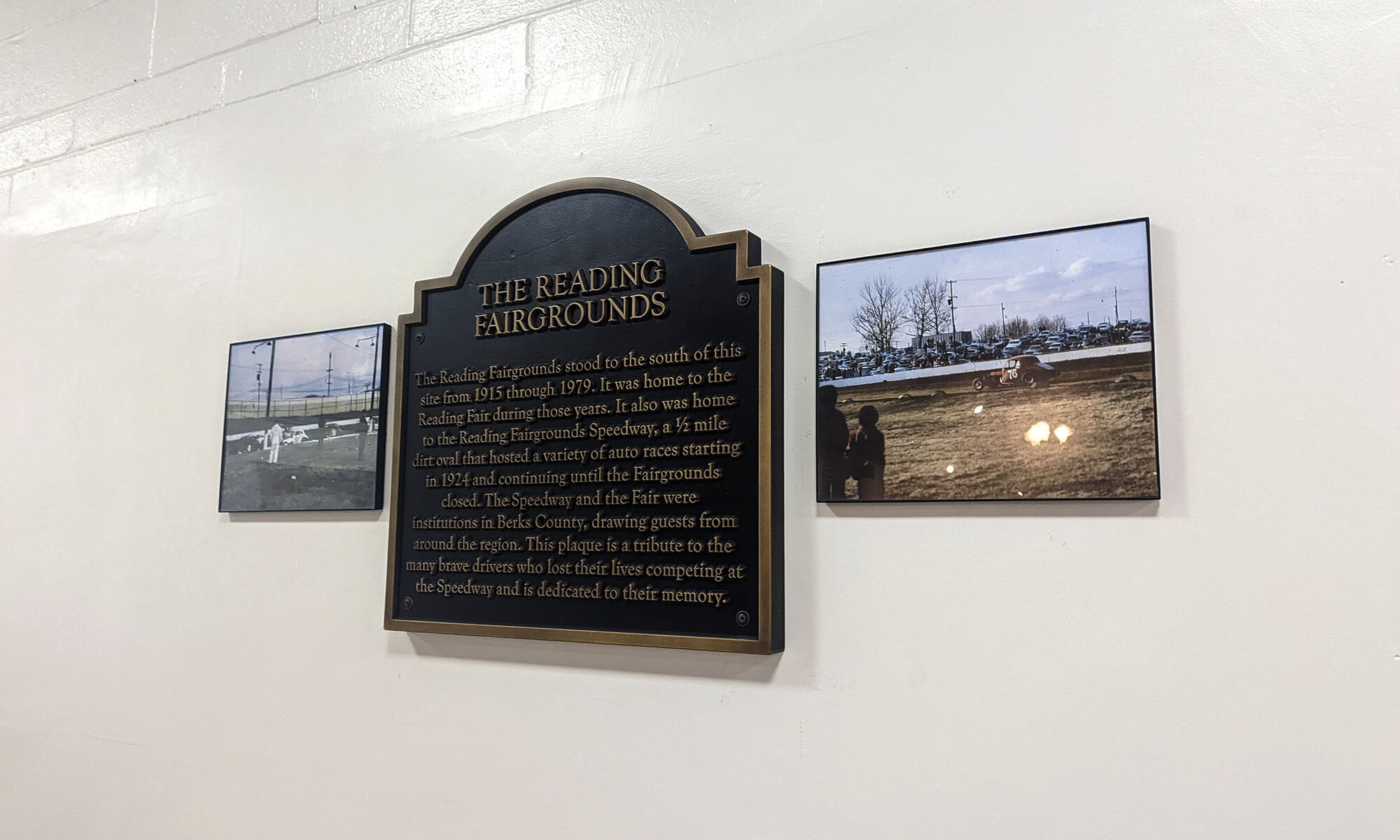 On Saturday May 21st, 2022, a plaque commemorating the Reading Fairgrounds & Speedway was ceremonially dedicated to the drivers who lost their lives there.

After reaching out and partnering with Reading Fairgrounds Racing Historical Society, who shared interest in creating a memorial, the green flag signaled on the project. In March of this year, Jeff reached out to the management of the Fairgrounds Farmer’s Market to solidify placement. Putting the marker indoors bypassed the need to jump through the zoning and permit hoops required by Muhlenberg Township, as well as allows visitors of the market to view the historic marker all year long, rain or shine.

The ceremonial dedication was a recollection of memories – many of which came from Joe Flemming, who once worked as Lindy Vicari’s right hand to help ensure the races were successful. Twenty-five cent hotdogs, the fan clubs decked out for each driver, even down to the conscientiousness of the staff of the speedway who made sure every patron safely got a ride home after races. These were just a few of the things that made the Fairgrounds Speedway special.

Reading has been associated with racing as long as any fans alive today can remember. For those that regularly patronized the Reading Fairgrounds Speedway and other tracks like it, it is a way of life. The culture of the track consumes them, and the way of life is often passed down generationally. This place will hold a fondness in the hearts of all fans who had the opportunity to witness races there before it closed in 1979.

Jeff views the wall on which the plaque now sits as a collaborative effort. The blank wall surrounding the marker can be used to hang more pictures or memorabilia. If you have a piece of speedway history you would like to contribute to the wall, contact Fairgrounds Market management for their approval and instructions on doing so. Otherwise, stop by and visit it next time you go to market.

A Complete list of Deaths that occurred At Reading Fairgrounds Speedway

Thank you for writing about the Reading Fairgrounds . This was a big part of our lives back in the day. Lots of great memories for many people.

The races and the fairgrounds were awesome, like so many things growing up there were. Many a Friday night, I went there with my Dad in the late 60s and early 70s for the races. We were there when Jackie Evans crashed and lost his life. Very cool to see the remembrance honoring his and others’ memories by Jeff Hartman, et al. Thanks for posting this, Alexa…

Thanks for doing this. The fair was a big summer event. Also, we could smell the racers’ exhaust all the way to 9th and Pike!

I must have been to at least 200 of the races. Reading Fair was awesome. The Mall they built really only did well for about 5 years. It started going down hill way before ecommerce became the big thing in shopping. It would have been nice if they had rebuilt the track once the Mall was gone. I hear Kenny Brightbill is still racing … just not winning.

Some of my fondest memories are the RSCA races at the fairgrounds. I now live in Zephyrhills, FL which is still the home of Buzzie Reutimann who is still racing modifieds and winning down here at 81 years young.