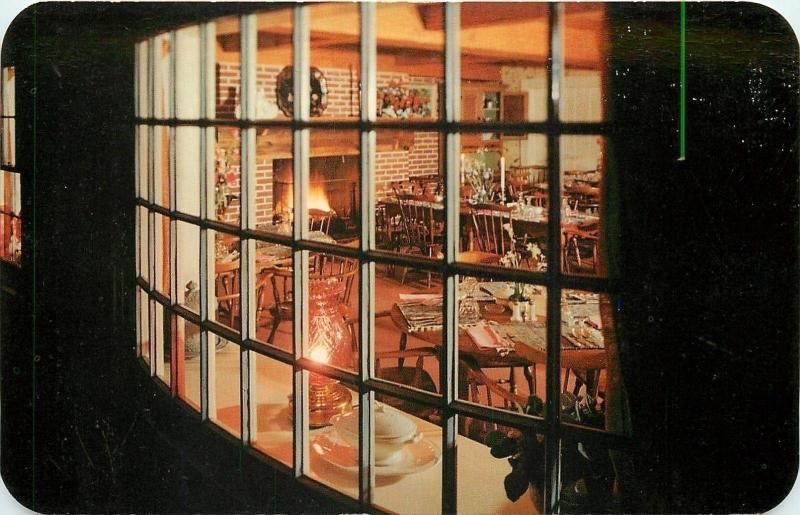 The Glockenspiel was a landmark Pennsylvania Dutch restaurant in northern Berks County. It originally dated back to 1751, built as a two-story farmhouse and later added on dining facilities and offices. It was located along Route 222 between Fleetwood and Kutztown. The restaurant specialized in Pennsylvania Dutch cuisine, and served a famed fruit & cheese tray with dinner. It also had a gift shop and the “Dutch Tavern” which was a bar area.

Above, an aerial photo of the Glockenspiel Restaurant along 222 in 1971. Below, the famous fruit and cheese platter served with every meal.

View of the French Room and waitress with a cheese tray, in the 1950s. Source

The “French Room” pictured on both above Postcards, was located in the basement of the building. The Glockenspiel was described in a 1984 Morning Call article as, “Decidedly colonial with traditional antiques, barn wood paneling, stone walls, and open beamed ceilings, the restaurant’s atmosphere helps diners lose track of cares and concerns of the everyday world. “

On the above image: Dutch Tavern on top right, Gift shop on bottom right.

Some fondly remember warm cider was served from the pot at this large fireplace just inside the entrance to the restaurant.

The Glockenspiel Restaurant had financial troubles starting in 1981 and was pulled out of bankruptcy in 1983.

It was closed briefly in 1981 by a state police task force when a previous owner, American Leisure Services Inc. of Austin, Texas, was cited for failure to pay sales taxes.

In 1982, problems with back taxes prompted state agents and deputies from the Berks County sheriff’s office to seize financial records at the restaurant.

The Glockenspiel was brought out of bankruptcy proceedings in 1983.

After renovations it reopened that year by the Glockenspiel Management Corp.

1986 Fire at the Glockenspiel Restaurant

“More than 150 firefighters battled the multi-alarm blaze that destroyed the historic Glockenspiel Restaurant along Route 222 southwest of Kutztown Tuesday night. The damage, including many antique furnishings, was estimated at more than $2 million.“

The Glockenspiel Restaurant was a total loss, and the owner stated initially that there were intentions to rebuild and add a motel with other facilities on the site. This never came to fruition.

The ruins remained standing until nature took course and slowly covered them. In 2005 the property was sold and redeveloped; a Shed Manufacturer built a new building on the property and has remained there since.

Our entire family spent many wonderful evenings and holidays at the Glockenspiel Restaurant. The food was always perfect and the atmosphere and waitresses were really wonderful. This would have been back in the late 1950s and 1960s and extending through until the restaurant caught fire. Really miss that great place.

I was the chef at the Glock when it burnt down. One of the saddest days in mine and my wife’s life. She was the baker there and that’s how we met. We have a lot of great memories from the Glock and we met a lot of great people.

I remember answering the phone that night at the house and telling my dad that the Glock was on fire. It breaks my heart to read these articles! I had such great times there as a teen! That place will always be in my heart!!

So many fond memories of this beautiful restaurant when my parents took my sisters and I there. Loved the warm, welcoming cider as you came in and the wonderful decor. I remember the fruit and cheese platter at the end was wonderful and am so sorry it burned down. Would loved to have taken my family there.

I remember family dinners there as a young girl in the early 1970s. My memory may be playing tricks on me but I recall my favorite dish came in a covered dish that looked like a chicken. I don’t recall what it was- maybe chicken pot pie- but damn if I didn’t love that the lid was a chicken! I heard later that Keith Haring was a waiter there, around the time we used to eat there. I like to think that maybe he was our water a few times.