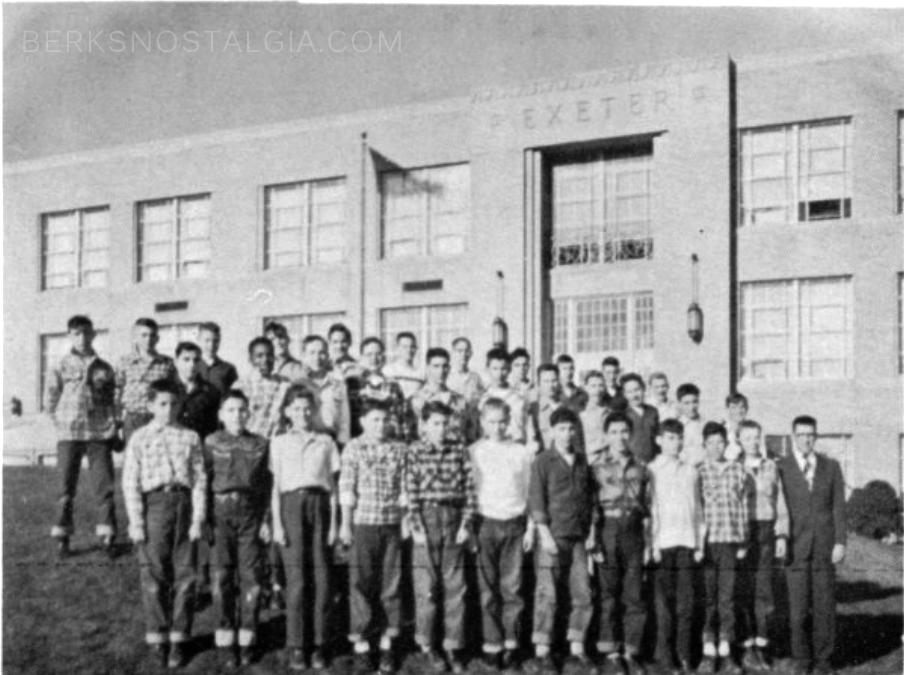 Education in Exeter Township began with the erection of a Friends’ Meeting House in 1726. A few years later influential Friends, including the ancestors of President Lincoln and Daniel Boone established a more formal school which all children might attend on payment of a fee. This strictly English school was maintained until 1860.

About this time the first one room public school was erected at Jacksonwald. A series of one room buildings followed as the population increased. These schools were gradually abandoned with the construction of a four room building in St. Lawrence in 1889, another in Baumstown in 1915, a third in Reiffton in 1928 and finally the 14 room building in Jacksonwald in 1938. It was located along Route 562 / Boyertown Pike just past the Oley Turnpike Road. This completed the consolidation program but those who wanted to complete grades 11 and 12 had to secure a high school education outside Exeter Township. Many chose to attend close schools like Mt. Penn or Birdsboro High for those final two years.

It was at the May meeting of the School Directors in 1950 that a study of present and future growth of school population, plus an outline of building needs to provide for the increase, was presented by the Supervising Principal, M. Luther Lausch.

Due to the old Exeter High School building containing no high school facilities besides classrooms, the site was limited for long term planning. Since the advantages of a separate plant for secondary and elementary pupils was readily recognizable, it was agreed by all authorities that a new site should be obtained. The general area for the site was determined by charting the home of every Township pupil and then determining the center of the population. State approval of the current Exeter High site in Reiffton was received May 10, 1952.

In May of 1953 construction bids were received for the new Exeter Township High school building. It opened its doors on September 7th, 1955, with 553 youth to become its first student body. So began the four-year complete high school program in Exeter Township.

Today the old Exeter High building is still in use by the district and it serves as Jacksonwald Elementary School. Many additions and upgrades have been made since it was abandoned by the oldest students in the district in 1955.