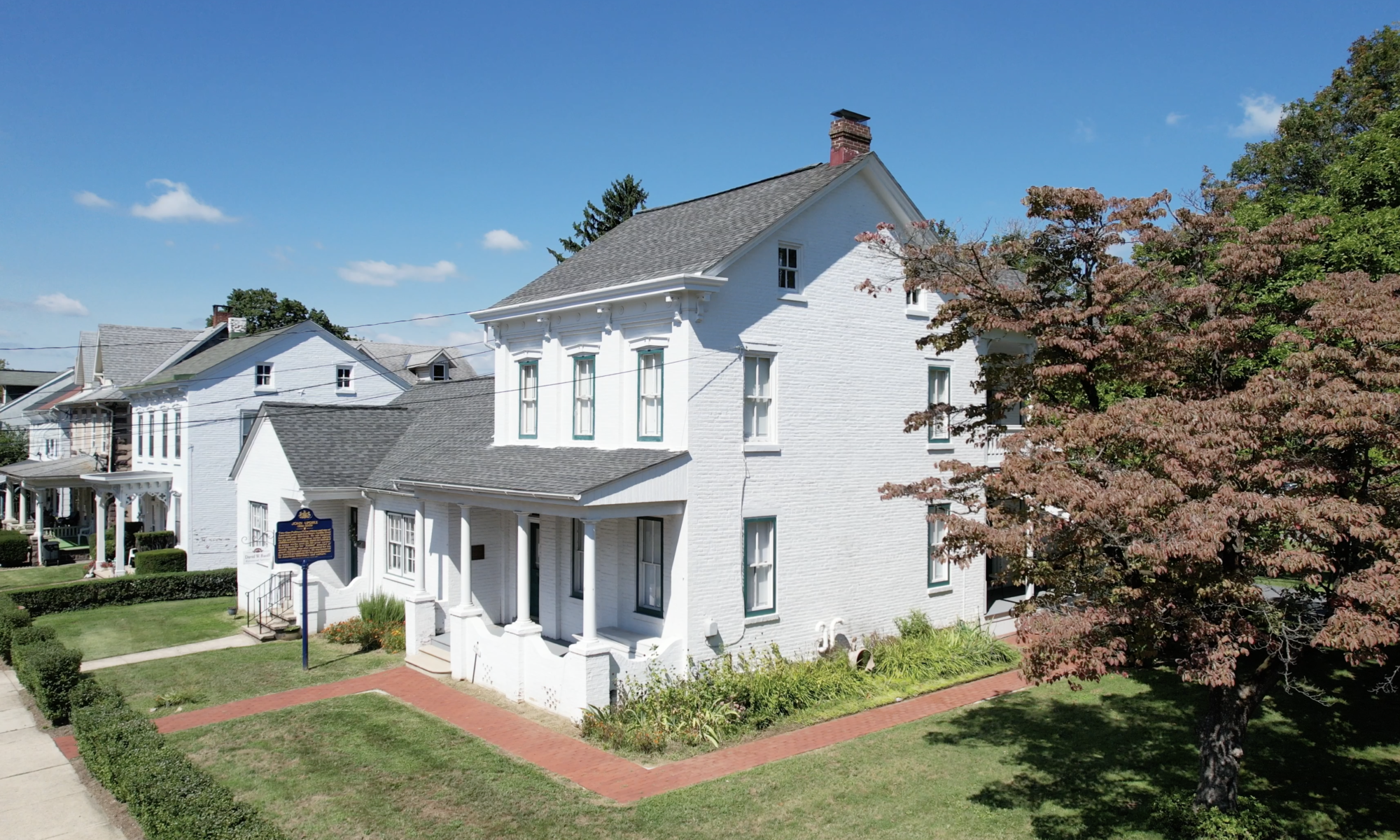 On Saturday September 10th I had the pleasure of visiting John Updike’s childhood home at 117 Philadelphia Avenue in Shillington. John lived here from his birth in 1932 until he was 13 years old. It is widely known that Shillington and the city of Reading were the inspirational foundation behind many of his stories and novels.

His most famous 4-part “Rabbit” novel series was set around a character living in Reading; though the locations were renamed in the book. The film adaptation was shot around Berks County in 1969. While the 1970 movie was widely considered a flop, two of the later novels in this series – Rabbit is Rich and Rabbit at Rest – would be recognized with the Pulitzer Prize for fiction.

The home, built in 1884 and purchased by John’s grandparents in 1922, was also the subject of some of his work. In 1945 his Mother moved their family to his grandparent’s farm in Plowville. Updike was so affected by leaving he would write a famous essay titled the Dogwood Tree: A Boyhood. In the essay he compares himself to a tree that was planted by his parents and grandparents in the side yard around his first birthday. John died in 2009 but the tree he grew up beside still stands next to the house.

The house was purchased by the John Updike Society in 2012, earned itself a spot on the U.S. Nation Register of Historic places in 2019, and was set to open as a museum in 2020. Covid ultimately ended up pushing that back – the Society officially dedicated the state historical marker in October of 2021 in announcement of its grand opening. In September 2021 the John Updike Society generously paid for signs to be erected around a local stream recently named “Rabbit Run“. The tributary runs through Shillington, Kenhorst and Cumru where it spills into the Angelica Creek. The signs are right on route 625 just north of route 724 and helped the society add more Updike interest to the area.

The museum is open to the public on Saturdays between 12pm-2pm and has 10 rooms of exhibits about John’s life and career as a writer. The interior was restored to how it would have looked while the Updike family lived there.

John was undoubtedly a sentimentalist. Shillington was his entire world when he lived in this house as a boy. The two windows on the far right of the second story were his bedroom. Out of the back north facing window were the basketball courts at the back of Shillington High School; where his father taught Math and he himself would graduate in 1950.

John would attend Harvard the fall after graduating. He never came back to Berks as a permanent resident but was occasionally seen later in his life nostalgically wandering the Shillington streets he once called home.

I grew up in Shillington. I knew John Updike. He was 2 years younger than me. We played together at the playground that was near his house. I remember the Old Poorhouse that he wrote about.
John H. Gallen MD

Great job, Alexa! Watching the video this morning over breakfast was a nice way to start my day.
For those who may want to dig a little deeper into Updike’s Shillington years, I would
suggest getting a hold of Self-Consciousness, a collection of his memoirs. In the chapter titled “A Soft Spring Night In Shillington,” Updike strolls around the town during an 1980 visit and searches out some of the locations that were meaningful to him during his early years. I used this as a kind of map to follow his footsteps and to see how much of his Shillington remains.

First, let me say I love the overdue acknowledgment of John Updike in the restoration of his boyhood home. Ten or more years ago I was looking for Updike’s home-I was on the same street and asked a couple walking if they knew which was his house. They had no idea. I further asked about the neighborhood and they let it be known they were residents of the street for some 10+ years and knew everybody.
It was disappointing to know one of America’s best writers was so little known – even on the same block where he derived so much of his material.
In 1955 I was transferred from Mohnton High, in the first year of school district consolidation to Gov. Mifflin High, Shillington.
My math teacher was John Updike’s Father, a very tall gangly character we all thought was a bit crazy. The Updike family’s physical appearance hid their inner intellect and Wesley Updike could have done just as well in Hollywood Westerns as the bad guy.
But he was a pleasant man prone to emphasizing manners and civility. In one class, sitting in my least favorite seat upfront, a hum came over the class with giggling and shifting. I could tell Mr. Updike sensed something was wrong – I raised my hand and informed him his fly was open.
Instead of correcting the issue and quickly moving on he celebrated my boldness and extolled my virtues as a “gentleman”. He spent the rest of the class teaching us the virtue of courage and confronting our fellow man when they have done or said something beyond the norm. On and on it went, to the delight of us math haters.
It makes one wonder how this most unusual man influenced his son. We all knew his son had gone off to Harvard. John had only recently graduated and by all accounts was a popular student usually found at the hang-out place on Lancaster Avenue, but none of us thought a budding Pulitzer writer was in the offing.
The open-fly incident was one of the best math classes of my high school year.

Keep up the website – Berks County needs this kind of acknowledgment.

Amazing recollection, Patrick. Thank you so much for sharing it.

My mother recalls having Mr. Updike’s father as a math teacher at Shillington High School.