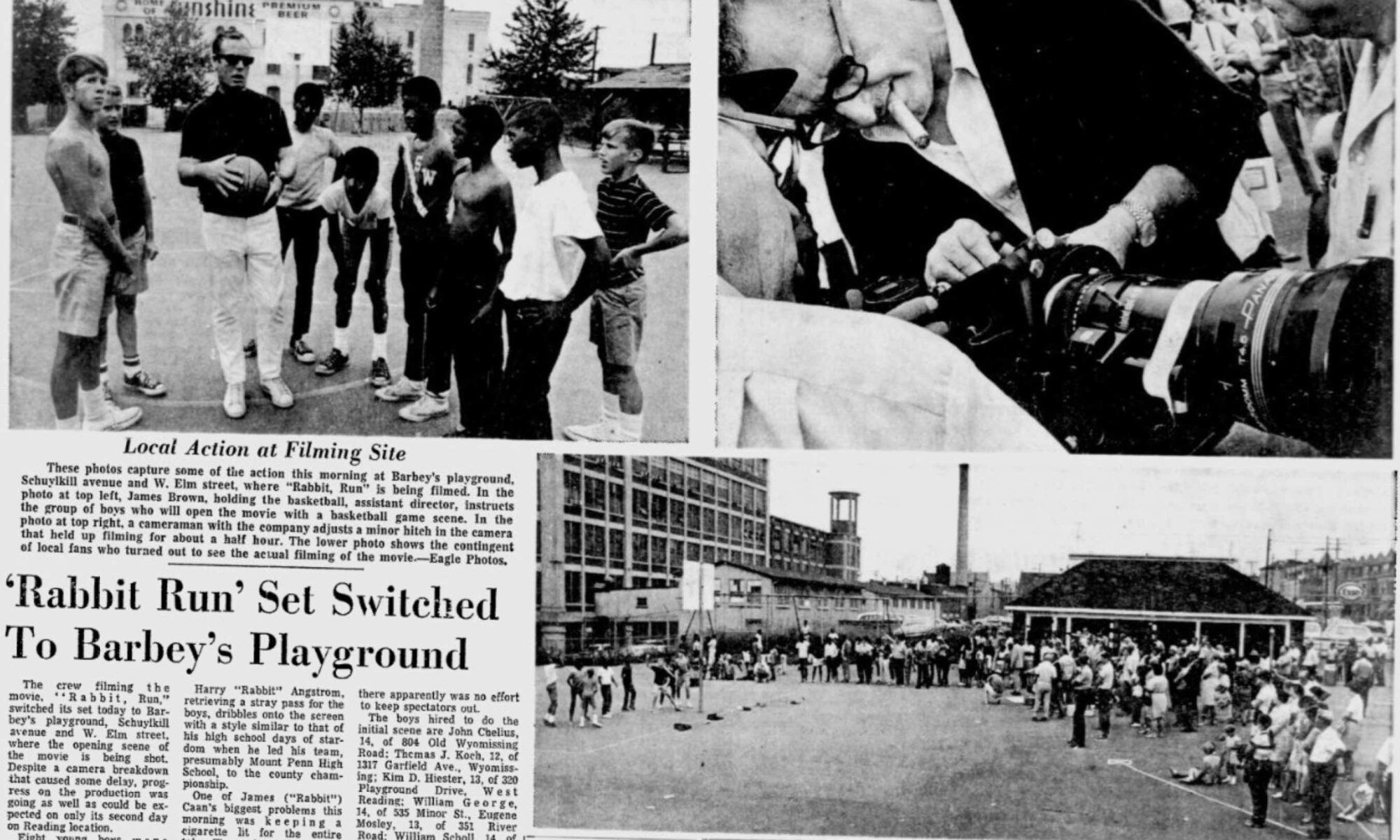 These photos capture some of the action this morning at Barbey’s playground, Schuykill avenue and W. Elm Street, where “Rabbit, Run” is being filmed. In the photo at top right a cameraman with the company adjusts a minor hitch in the camera that held up filming for about a half hour. The lower photo shows the contingent of local fans who turned out to see the actual filming of the movie. – Eagle Photos

On this day in 1969 the opening scene of the movie, Rabbit, Run was shot at Barbey’s playground. The scene depicts Harry “Rabbit” Angstrom, who might be considered both the movie’s pro and antagonist, playing basketball with a bunch of local kids. The area is barely recognizable from the scene, as it has changed extensively since filming, mainly due to flooding from Hurricane Agnes and redevelopment of the area. Even the playground itself has been renovated since filming.

The entire movie was filmed in and around Reading. Harry Angstrom’s home, which he came and left fairly frequently in the film was 558 South 15th Street. The home sold relatively recently in 2019, and as you can see from the listing photos, the interior of the home was not used as the set for the interior of his family apartment.

After running away from his wife in the film, Harry visits his old basketball coach for advice. The Coach’s residence is depicted as a white building with a sign that says “Sunshine Athletic Club”. Sunshine Athletic Association was a location from the book, and I am unsure if it was based in reality. Google yields no results. If you know whether the Sunshine Athletic club existed, or where it was located feel free to drop it in the comments.

Harry and his Coach end up at dinner at a Chinese restaurant with two escorts. The interior of the restaurant must be local because a Sunshine Beer light can be seen illuminated over the bar in the background. The only two Chinese places I know of in Berks at that time were The Canton Restaurant on Penn Street and Far East Chinese, which had left its long-time location at Penn Street in Reading three years prior to filming and settled on Lancaster Pike outside of Shillington.

In a later scene, Harry plays golf with a Pastor at Berkshire Country Club. A scene at a public pool was shot at East Reading Pool.

The last scene of the movie, a funeral takes place at Saint Peter the Apostle Cemetery, with a perfect view of the Reading skyline in the background.

What about the Woodward Cafe? I was married to an R.N. at the time whose crowd frequented the establishment, and there was a mad scramble to become an “extra” in the bar scene(s). I don’t remember any more. I was in Vietnam! (David Procter)

I remember that Cafe but I don’t think I ever ate there. We moved to the 300 block of North Front Street that year. We lives above Salvi’s luncheonett on 2nd and Washington Sts.

We weren’t allowed at that playground because even at that point that was a bad spot in the city. So sad.

My father was an electrician for Waldmans electric at the time. The movie crew hired Waldman‘s to provide help with setting up electrical connections for the various equipment. I remember my dad coming home from work very excited that he saw all these actors and work with people on the sides in terms of setting up equipment etc. great memory.

The movie was based on the book by John Updike. He wrote a series of novels using the Rabbit character. The books all used Reading location references. He was a great writer and his boyhood home in Shillington is now a state landmark. Very good book. The movie was so so. Starred James Caan, who later became Sonny Corleone in The Godfather.

I saw the movie when it came out, and that lead me to read Rabbit, Run. In my imagination I kept seeing James Caan as the Rabbit Angstrom character! Every one of the four novels in the tetralogy are terrific, I think it was Updike’s greatest achievement.

.
Summer Lovin’ by John Updike
.
The heart melts in the heat and everything seems lovable. From the ages of 5 to 13, in Shillington, Pennsylvania (pop. 4,900), I spent my summers at a playground a few steps from the end of our backyard. To get there, you had to cross a narrow cornfield with paths worn through it; on the other side of the corn rows, you came to the town’s school property, acres of it, enough to hold a football gridiron with a cinder track around it, a softball field, and a baseball field. The diamond had been excavated from a small hill, with steep banks on both the first-and-third-base sides, and on top of the first base slope stood the playground – two slides and a set of swings, a roundabout you pushed and that could make you sick with dizziness, a sandbox, a box for box hockey, and, off to the side near another, bigger cornfield, two outhouses, one for the girls and one for the boys. Every morning, having eaten my Rice Krispies, I set off down through our yard, past the long grape arbor with its angry buzzing traps for Japanese beetles, toward the playground, my heart beating as fast as a lover’s. You saw pretty much the same children at the playground day after day, and half of them were girls. They had sun-browned legs and wiry bodies; in other seasons I walked to school with these same girls through the fallen leaves and horse chestnuts, the winter snows, the spring mud and showers. But they bewitched me most in the summer, when they wore the least clothes and were the most idle and lackadaisical – partners in the mild crime of killing time, amid the squeak of swing chains and the click of Chinese checkers in the pavilion’s shade. Now some are dead and some are sick and some have moved out of Pennsylvania, but they are with me still, the nymphs of romantic summertime. In that latitude the temperature flirted with a hundred degrees for a few of the dog days, but to a child it can hardly ever be too hot. I liked the sun licking the backs of my legs, and the sweat between my shoulder blades, and the violet evenings, with ice cream and fireflies, wherein the long days slowly cooled. I liked the antspiling up dirt like coffee grounds between the bricks of our front walk, and the milkweed spittle in the vacant lot next door. I liked the freedom of shorts and sneakers, and striped T-shirt, and I liked the way I looked in the mirror, with freckles and a short hot-weather haircut.
.
We love easily in summer, perhaps, because we love our summer selves. (I played in the corn fields a few miles from Updike’s location. We lived in Wyomissing, PA, but he was writing about my youth, too) (David Procter)

Rabbit Run rented the building where GNA Ristorante (Penn Ave and Tulpehocken Ave) is now located. It used to be a grocery store called Food Fair. Our family shopped there for years. The store had closed and the building was vacant. They shot some movie scenes there. I remember that West Reading’s own Kim Hiester was an extra in the film.