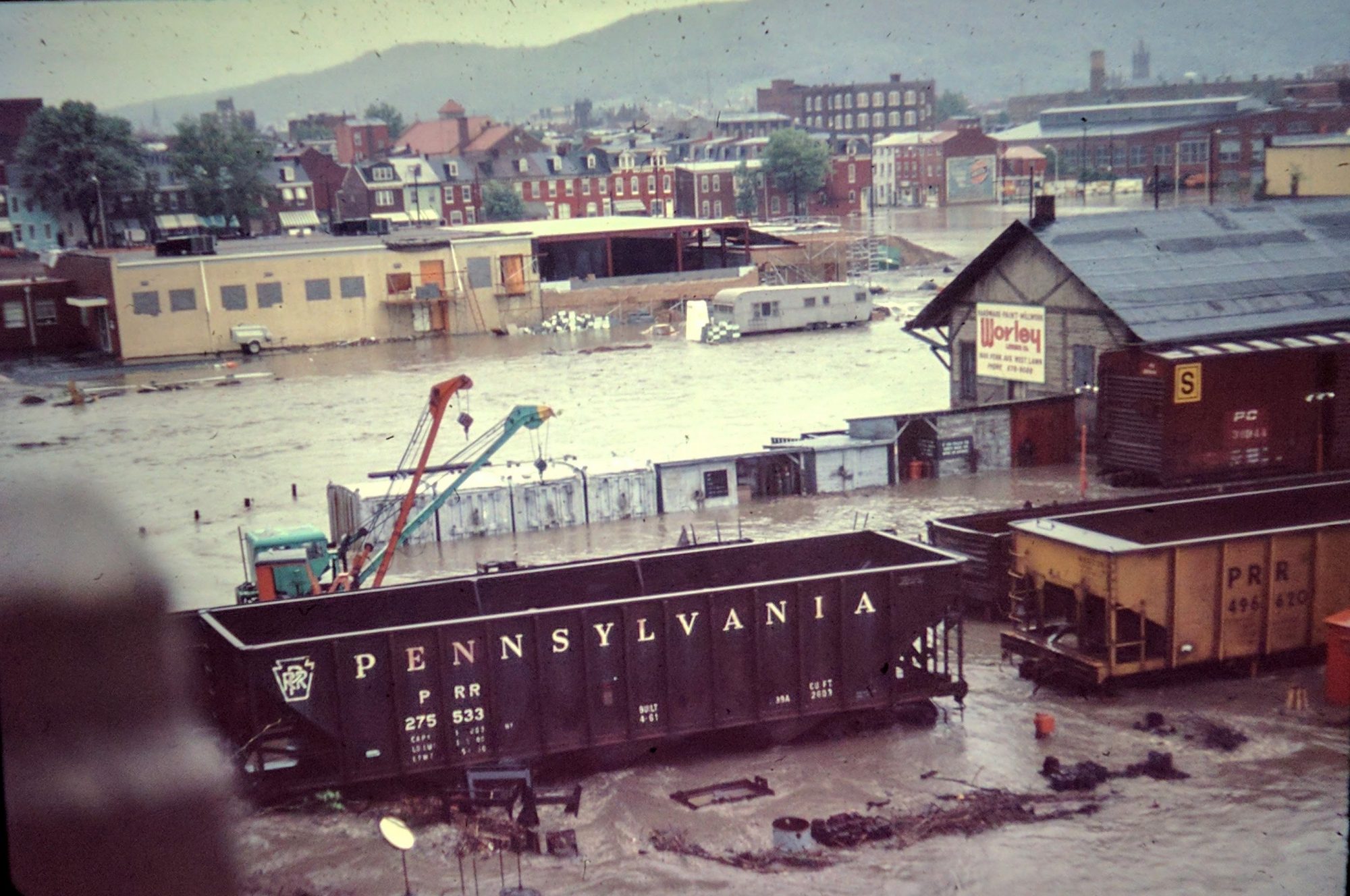 Hurricane Agnes caused extreme damage to Berks County residences and businesses when it hit June, 22nd 1972. In Reading, the Schuylkill River crested to a record high of 31.3 feet. Hundreds of people were evacuated and over a hundred homes destroyed. By the time the storm ended on the 23rd about 8.6 inches of rain had fallen on Berks in only a little over 24 hours. Floodwater reached beyond 2nd street. Two Berks Countians lost their lives.

The two casualties, a married couple, were found in a partially submerged vehicle along a rural road in Perry Township. They were attempting to flee their flooding home in Berne and crossed a steel bridge spanning the Schuylkill and came to rest in a 5 foot ditch that was full of water. They were unable to escape the automobile.

Reading proper was not the only area in the county that suffered widespread damage. Other communities situated near the Schuykill river, like Birdsboro, also had substantial damage to structures. City and Township water infrastructure was troubled nearly everywhere, and many remember not being able to take showers or drink tap water for at least a few days because sewers were backed up.

Two major fires occurred as a result of the damage. Fecera’s Furniture in Birdsboro was a total loss, and the 7-Up Bottling Co. in Muhlenberg Township also suffered extensive damage.

The Cross Key’s bridge, a steel structure built it 1903, was completely lifted off its concrete supports and carried a short ways down the cresting river.

When Agnes hit, the long process of constructing Blue Marsh Dam had only begun two years prior and was still in the land acquisition phase. Building Blue Marsh Lake was partly a preventative measure against flooding of this magnitude, but it would not be completed and put into use until the end of the decade.

This unprecedented natural event destroyed entire neighborhoods on the river edges of the city. It played a large role in tearing apart the sociological fabric of Reading. Prior to Agnes people tended to neighbor together by race and religion in certain sections of town. People displaced by Agnes found new housing elsewhere, but it was the beginning of the end for similarly demographically divided neighborhoods.

As a result of hurricane Agnes, more than 68,000 homes and 3,000 businesses were destroyed in the state of Pennsylvania. At least 220,000 residents became temporarily homeless. A total of 50 Pennsylvanians lost their lives and when the water receded the state tallied in at $2.3 billion in losses. Half a century later, Hurricane Agnes still goes down as Pennsylvania’s worst natural disaster.

The view in various directions from the Penn Street bridge this morning showed evidences of the ravages of the Schuykill River no matter where one looked.

The Schuykill River has returned to within its banks – but the littered evidence of its overflowing remains, especially in the background of this picture, taken this morning from the Penn Street Bridge looking southward.

WATER SURROUNDS PLANT – The Birdsboro Armorcast plant sits like a giant man-made island in a lake formed by water from the flood-swollen Schuykill River backing up onto the plant grounds. The huge facility, which turned out armor steel during World War II, recently was purchased by Greater Berks Development Fund for industrial development.

BASHED AND BATTERED – A bashed and battered section of the Cross Keys Bridge lies on its side on the embankment of the Schuykill River after raging flood waters tore the bridge from its piers Friday. The remainder of the bridge washed downstream until it became hung up mid-stream.

HOME GONE – This is the site of one home which was swept away by the swift current of the Manatawny Creek which ravaged the area during Friday’s flood.

BRIDGE IN WAY – The raging Tulpehocken Creek wasn’t satisfied with just running under Gring’s Mill Bridge, before this picture was taken it ran over the bridge itself.

Huge concrete railing block on the Gring’s Mill Bridge, at the county’s Gring’s Mill Recreation Area, in northern Spring Township, we moved by the force of the flooded Tulphocken Creek on Friday.

The devastating ruins struct at the Reading High School construction project and provided a swimming pool before its time. The project which is estimated to cost nearly $8 million is to include a field house containing a pool when completed. Today it appears to be an open-air swimming hole.

The sign Water Road in this picture wasn’t kidding. This is the intersection of State Hill and Water roads at the Blue Marsh Bridge, northwest of State Hill, and under the Tulpehocken Creek on Friday.

Below are 20 photos taken by my grandfather after the storm hit. Enjoy!

Thank you for posting all these wonderful photos

[…] process was stalled briefly in 1972 with Hurricane Agnes causing flooding. Construction of the dam began in 1974 and was completed July 5th, 1979. Below […]

my goodness! As if having a baby isn’t enough of an experience… Glad you made it!

I was 11 years old when this happened. I remember the flooding near Moores diner on Lancaster Ave. One thing that stuck with me that there were hundreds or more of hot dogs just floating in the water under the Bigamin St bridge from the Berks packaging plant where they made the hot dogs. Lol the things that make a lasting impression on an 11 year old kid 😉

Thanks for sharing that memory Cathy! I laughed out loud picturing it!

Agnes occurred in the summer before I left the city for college. I worked all summer for the City Parks & Rec. dept. On the first day of the storm, we were ordered to go over to Pendora and get every rowboat we could find. We were sent to the wards near the river wearing firehouse rain gear. It was the first time we understood. Several blocks were underwater. We walked the boats to the front doors of houses we could reach to get folks out. The aftermath days were the worst. River snakes, rot, infestations, and washing down walls from a tank truck filled from a swimming pool. lots of overtime $$$ though.