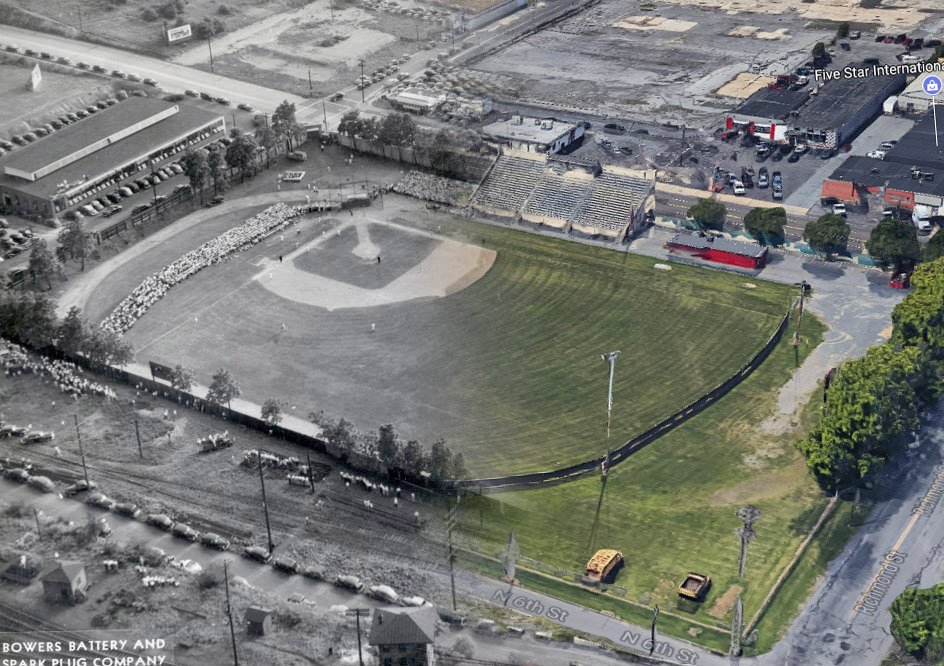 George Field is located at 1801 North 5t Street. The land for this field was purchased by Reading High School’s Athletic Association on May 28th, 1909. The field was dedicated officially three days later on May 31st, 1909. At this time the Boys and Girls High Schools were separate entities, and only the boys competed in sports at this location. It was initially built for Reading’s football team and track & field events.

On December 14th, 1911 the stadium was officially named “George Field” after Professor George M. Jones, President of the Athletic Association and Reading High teacher who had lead athletic affairs for many years.

The athletic association purchased the property for $9,700 and immediately spent over $3k creating the stadium. For the majority of the 1910s the Reading Times covered many attempts of the Athletic Association’s to fundraise enough money to pay off the debt they owed on it. In 1914 various graduating classes pledged to raise money to build a state-of-the-art stone wall around the entire property – a lofty goal that never quite came to fruition. Reading Boys High School’s Class of 1914 did erect gates at the southwest corner of the property. Those gates face northbound 5th Street and are still standing today.

In December 1922 the Athletic Association transferred ownership of the property to the Reading School Board. Around this time planning for the new Reading High School was in the works. Boys and Girls would again be under one roof for education for the first time in 46 years.

How Did Reading become the Red Knights?

In local newspapers the “new” high school building was referred to as the Castle On The Hill since its conception. It was built between 1926-27 and opened to the student body on September 7th, 1927. One might think that the Reading sports teams earned their title as “Red Knights” when they entered their Castle. Not exactly.

Prior to the Castle’s construction, Reading’s Boys teams were occasionally referred to only as the “Red & Black“. This name actually stuck until 1932 when the Reading High yearbook referred to themselves mainly as the “Red Raiders“. The first reference to “Red Knights” didn’t appear until the school’s 1934 yearbook, in which states the moniker was newly appointed to a successful basketball team – nearly seven years after the school opened.

The yearbook doesn’t state how the name was earned, though it seems like a no-brainer. Between this first mention in 1934 and 1938 the Reading Times continued to refer to Reading’s sports teams as the “Red Raiders“.

Perhaps suffering from an identity crisis, Reading’s 1935-1942 Arxalma yearbooks name its sporting teams the Red Raiders, Red Knights and randomly the Red Rockets interchangeably. Only after 1942 is “Red Knight” the exclusive mascot for Reading High.

The 2 mile walk from the Castle to George Field was a long one – the field was replaced in 1938 by the newer stadium built right behind the school. George Field is still owned by Reading School District and used for baseball games.

Thanks to Michelle Lynch for compiling some of this information and sending me the idea for this article.

George Field was named after my grandfather George Jones sr esq. who contributed much of his time to the Boy Scouts and many other organizations. More info. On his life are available at Berkshire County Historical Society

Is this the field that the Phila. Eagles used for their preseason training camp for many years? Perhaps that was at a different Albright field. I believe that the Eagles were there until the early 1970’s.

Not sure if the Eagles used George Field but they did use some Albright facilities for a couple of years.