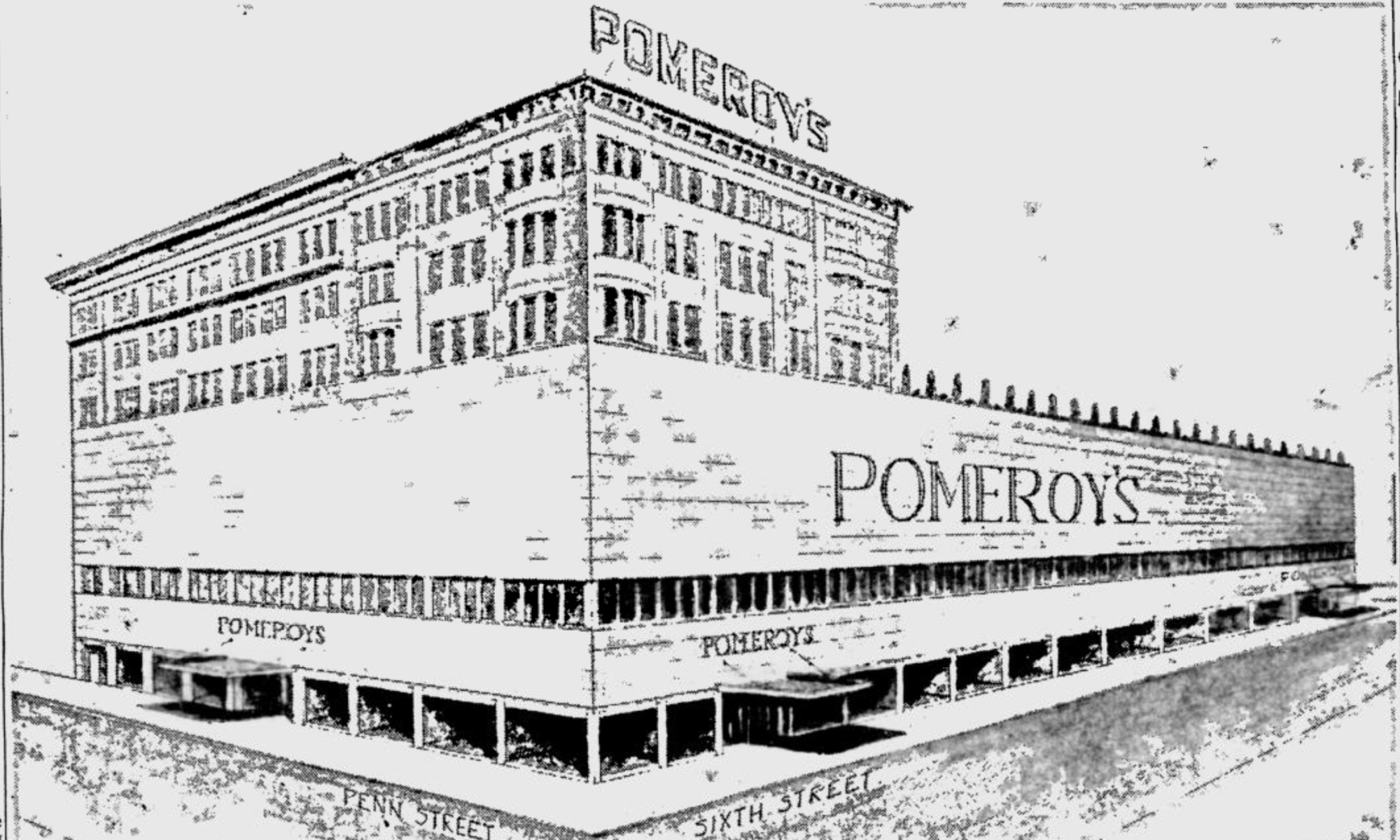 An architect’s drawing of the proposed $1,500,000 expansion and modernization project at Pomeroy’s, Inc., is shown in the top photo, while below inside the outlined area, are the five buildings which will be razed and the diner, at 6th and Cherry streets, which will be moved to make way for the new construction. (Eagle Staff Photo)

Pomeroy’s expansion planning and acquisition of the adjacent structures south of it on Sixth Street took roughly three years. The buildings to be razed included a three story building which housed equipment for the radio station WRAW and a two story building that once housed Kennedy’s Drug Store.

The facade was to be upgraded to a modern tile front. Due to the store being air-conditioned there was no longer a need for the copious amount of windows on the building. Max Heller, vice-president of Pomeroy’s was quoted in the Reading Eagle saying that Pomeroy’s decided to proceed with this expansion program because it reflects the store’s faith in the downtown shopping area of Reading. In hindsight, the height of Pomeroy’s success was already behind it. The department store would have another solid decade before the slow decline of being put out of business by shopping being driven out of downtown and into the malls.

While Pomeroy’s did end up updating the facade, it didn’t quite look like the image rendered above that ran in the August 2nd, 1957 Reading Eagle. In fact, they never actually razed the buildings as is viewable in this 1966 90th anniversary ad for Pomeroy’s;

Had they built the proposed addition, I think it would have been a real eyesore! And it wouldn’t have saved the company either. I wonder what happened to the diner….

My sister and I often shopped Pomeroy’s in the 1960’s while in Reading attending a movie at the Embassey, Astor or Lowe;s theater. Visiting toyland on the 6th floor and seeing Santa at Christmas was always looked forward to. My wife recalls them actually providing a pony up there for kids rides. I will never forget stepping incorrectly onto the escalator coming down and the step broke apart and I tumbled part way down! Pomeroy’s even had a pet center and sold puppies at one time.