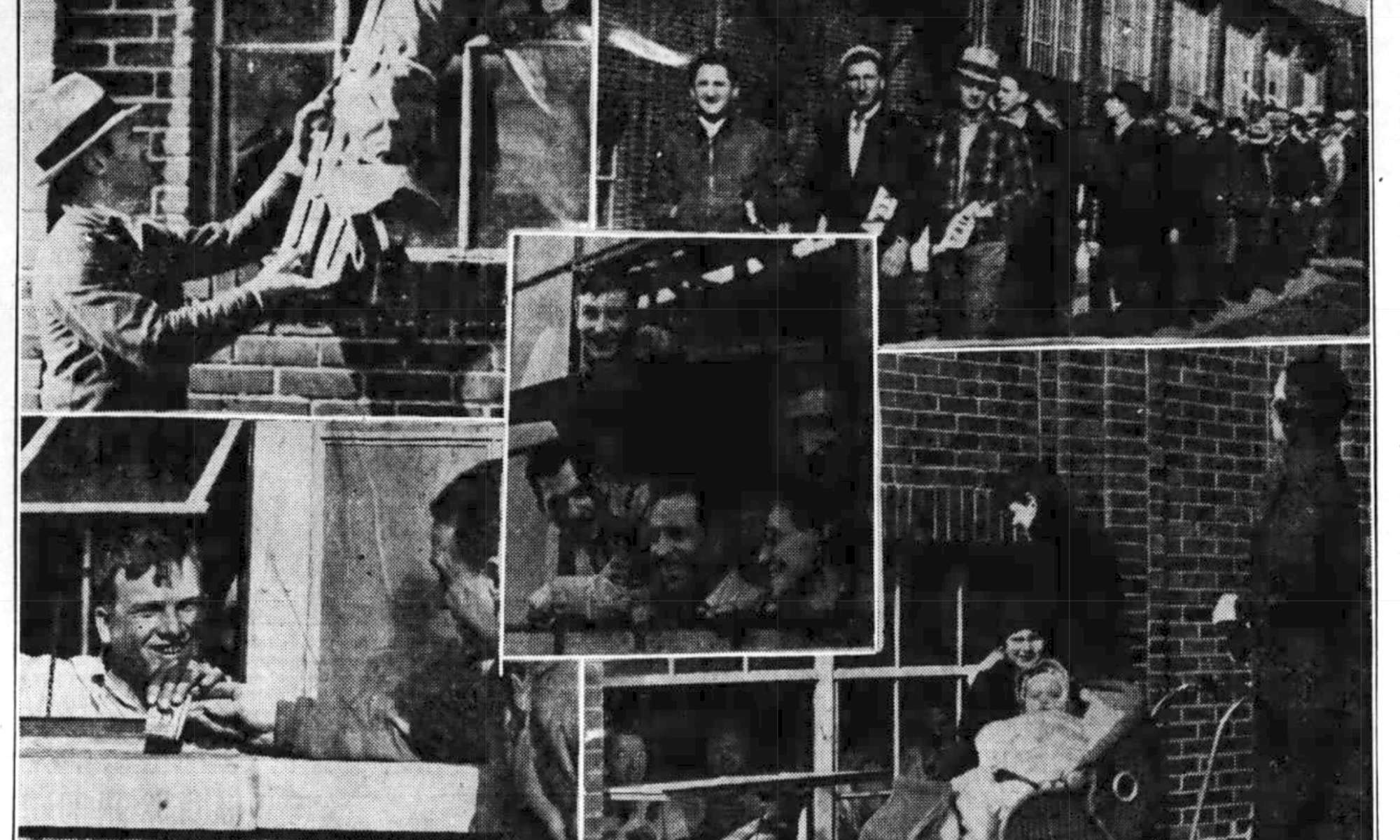 Secretary of Labor Report on the Berkshire Conditions

Shortly after the deadly first day of picketing, Governor Earle tasked Pennsylvania Labor Secretary Ralph M. Bashore with investigating the strike that was taking place at the Berkshire Knitting Mills. By October 20th, his account was made public. He too believed that the American Federation of Hosiery Worker’s grievances were valid and that mediation between the parties was necessary. During his investigation, Bashore also met with leaders of other manufacturers in the area and they also agreed that mediation was necessary. Bashore also recommended letting the employees of Berkshire Knitting Mills vote on a representative to attend mediation which Hugo Hemmerich refused.

Related to the problem of the settlement of this strike is the question of the renewal of the union contract existing with certain other manufacturers in the Reading and Philadelphia areas which expires this month. Arising out of this difference at the Berkshire is the question of whether or not there should be a wage reduction in the entire northern area.”

Twice Bashore urged Hugo Hemmerich to negotiate with the AFHW; the second time after informing Hemmerich of the overwhelmingly disapproving opinion of his refusal to negotiate from other hosiery leaders in the region. Yet both times Hemmerich declined.

Around this same time the Governor removed the State Police troop that was assigned to patrol the strike scene at the Berkshire. As the weeks dredged on, a typical Reading Eagle daily report on picket numbers can be seen below;

On October 25th Berkshire plant manager Hugo Hemmerich released a statement saying that the Berkshire was dismantling and disposing of over 100 knitting machines and that more will follow. According to Hemmerich,

We deeply regret the necessity for such drastic action, but there appears to be no other course. At the same time we can assure work for those of our employees who are with us.

We had hoped that our desire to maintain our plant on a basis satisfactory to the overwhelming majority of our employees would command the approval of everyone interested in the welfare of the community we have helped to build up. Without such approval we are forced to accept the offer of communities in other states where our business can be conducted under peaceful conditions.

Under these conditions we are compelled to halt our plans for enlarging and developing our plant in Berks County.

After receiving the threat of Berkshire moving knitting jobs to other states, Luther D. Adams, president of local branch of AFHW called Hemmerich’s bluff stating, “this seems like an outright refutation of his own claims that the mill, ever since the strike has started, has been working practically 100 percent.” “If,” Adams added, “Mr. Hemmerich means what he implies, but does not say in so many words, that the Berkshire is going to start smaller mills in other communities, let him remember that where he goes the union will follow.”

Apparently more information came to light by the 27th because Adams released another statement, “the machines that are being dismantled are obsolete and cannot possibly be operated with profit in any event” “moreover, the mill started to dismantle them months ago, long before the strike was in prospect, and the dismantling has nothing whatever  to do with the strike.” No future mention was made of these machines and the Berkshire never did branch into other states.

Another notable event on the October 27th was Mrs. Janssen, wife of Berkshire owner Henry Janssen, passed away after a long illness. The Berkshire was closed on October 29th and picketing ceased for her funeral.

On October 30th union leaders organized a costume picketing party in celebration of Halloween. Hundreds of picketers in costume marched around the knitting mills.

On Election Day, Nov 3rd 1936 , the union’s strike against Berkshire Knittings Mills entered its 33rd day. In wake of Roosevelt’s landslide reelection win over Landon, the organized workers of Pennsylvania considered the victory a complete endorsement of their policies of collective bargaining. Pickets continued to march around the mill while union leaders claimed gains and Hugo Hemmerich declared there was “no change whatsoever” in the number of employees working inside.

Passing weeks turned into months and both sides remained firm in their stances. On December 13th, 1936 tensions flared again, this time at 7th and Reading Avenue when 14 people were injured. Fists and stones flew while workers were attempting to enter the mill. Most of the injuries were just cuts, bruises and bloody noses. The West Reading police unleashed tear gas bombs into the picket lines, reminiscent of the first night, to stop the the violence. Small skirmishes popped up like this every so often which usually led to the arrests of a handful of strikers.

On December 23rd the Berkshire Employee’s Association led by Fred Werner sent a petition signed by 4700 Berkshire employees to the Governor to reinstate the state police presence at the Berkshire for protection. On the 30th it was reported that oil bombs were thrown through windows of several Berkshire employee homes, which was a seen as a direct attack by union sympathizers. Attacks like this to the homes of Berkshire employees became a common occurrence with sometimes multiple being reported each week in the Reading Times.

The tumultuous year of 1936 closed with two Berkshire knitters being arrested on site at the Berkshire for carrying concealed deadly weapons. Both men were carrying 24 inch police riot sticks, and claimed they were paid by the Berkshire Knitting Mills to patrol and take care of any trouble from strikers. The one man told police he was one of about 25 huskies deputized by the mill and was paid extra for the patrol work in addition to regular mill salary. He also named Fred Werner as the man who gave him his orders.

While the Berkshire management was taking protection into their own hands, union leaders rang in the 1937 new year planning a trip to Washington D.C. to take their appeals to the very top; President Roosevelt himself.

It was January 4th, 1937 when Luther D. Adams and a committee of nearly one hundred strikers made the trek to the nation’s capitol. They were met in the White House by Secretary Marvin McIntyre who expressed regret that the president could not meet them, but informed them he would be taking their statements and reporting back to the president within 24 hours. The district manager of AFHW, Herbert Payne, brought several undetonated “vomiting bombs” which he told McIntyre were used by the Wyomissing and West Reading police against non-violent pickets. The union group left McIntyre with the plea that the President himself direct the owners of the Berkshire Knitting Mills to meet with representatives of the strikers and negotiate a settlement.

AFHW Calls for a General Hosiery Strike to Mount Pressure

In the very beginning of the striking process a “general hosiery strike” was not something AFHW national president Emil Reive said was being considered as an option to apply pressure to the Berkshire Knitting Mills. After five months of stalled progress and existing contracts expiring with other local mills, the AFHW needed to escalate their position. In late February 1937 AFHW union leaders began meetings with other local unionized hosiery manufacturers at the Berkshire Hotel in Reading. They were clear that a general industry strike was coming soon, but the union did provide two conditions – the general strike would not effect mills that exerted pressure toward Berkshire Knitting Mills to negotiate with AFHW, in addition to signing renewal union agreements regarding their own mills.

On March 1st the AFHW followed through and called a general “sit-down” strike of six of Berks County’s twenty hosiery mills. The firstly effected mills were Nolde & Horst’s Womelsdorf plant, Oakbrook Knitting Mills, Busy Bee Mill plants in Mohnton and Northmont, Howard Hosiery Co. in Sinking Spring and W. G. Leininger also in Mohnton. This strike was participated in by 2000 employees across these smaller plants.

By the next day the amount of mills crippled by sit-down protests doubled to twelve, including an additional 1600 workers in the main Nolde & Horst plant in Reading which was the second largest manufacturer behind Berkshire at the time. Sit-down striking was a method borrowed from France, unique in that workers took their posts inside the plants but refused to work or leave. Some of these workers stayed overnight, singing, dancing, and joyously celebrating the power they held over their employers. Their determination to improve working conditions and wages for the benefit of all fellow mill workers was a relatively new feat that was taking the country by storm in nearly every labor industry at this time. The control was finally in the hands of the workers seemingly everywhere but the Berkshire Knitting Mills.

By March 12th all twenty of Berks County’s hosiery mill manufacturers were closed voluntarily or by strikers leaving 8000 out of work. Mediations were being conducted across the board for each mill. These strikes were a community effort; women’s union auxiliary groups came together and cooked large amounts of food to feed the men sitting in the mills for days on end.

By March 19th Rosedale Knitting Mill took to the U.S. District court to evict their workers from the mill building. Union lawyers made the case against eviction with a theory that a worker has a property right in his job.

When the sit-down striking Rosedale workers were presented with paper notices of their hearing they promptly threw them out the windows.