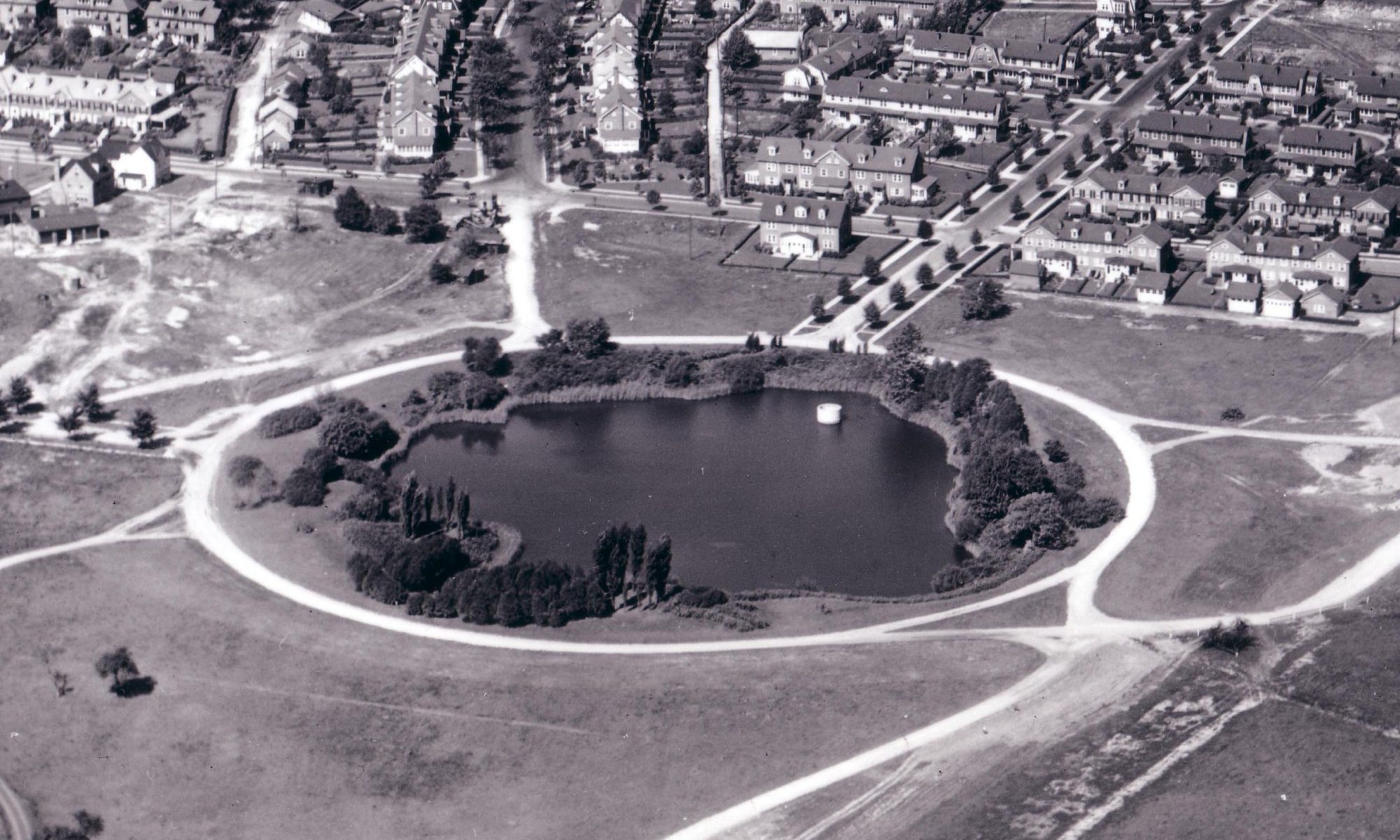 Below are aerial photos of Weiser Lake aka the Mine Hole near Wyomissing/West Reading. The first was taken in 1932, when the Reading Hospital Building was brand new. Pictured in the distant right is the Berkshire Knitting Mills.

Before the Hospital expanded there was a small lake that sat where the current 7th Avenue garage sits. If you ever wondered how Lake View Drive got it’s name, it should be clear now. While there is currently no body of water in sight, houses on the street used to be water-front property. It was named Weiser Lake by the Wyomissing Develoment Co., but most locals affectionately called it the “Mine Hole”. It was the water-filled remnants of an old iron ore mine from the mid-1800s.

According to this Reading Eagle article,

For Cindi Bjorke, the scene was like something out of a Norman Rockwell painting: a winter day, fields covered with snow and a large, frozen lake with ice skaters darting about.

In Bjorke’s mind, this is not some rural setting in an outlying part of Berks County. Instead, it’s a fond memory of growing up in West Reading.

“There were bonfires, and the whole community was out ice skating,” she said. “In the summer, it was the local hangout.”

Some time ago, Bjorke was visiting the Reading Hospital campus and remembered those fine winter days spent skating on the lake that once existed off Seventh Avenue. Now, the land is occupied by a parking garage near the Scottish Rite Cathedral.

And while Bjorke spent childhood days playing at the lake, she never knew the history behind it.

She recently wrote to the Reading Eagle to learn more about West Reading’s lake.

The lake, dubbed Weiser Lake in the 1960s, got its start as an iron ore mine a century before. For about 16 years, iron ore was taken from the mine and sold to furnaces in Lebanon County, says Berks County historian George M. Meiser IX.

In the mid-1870s, more than 50 tons of ore were removed and the mine pit grew 50 feet deep. Things were humming along fine until Sept. 28, 1876, when, following a torrential rain, a spring broke through the mine walls and began to flood the hole, Meiser wrote in “The Passing Scene Volume 2.”

Pumps were no help; workers were forced to abandon the mine, and the resulting lake became a community attraction.

Elizabeth Heckler, a longtime West Reading resident, said the lake was a magnet for activity.

“Once it was frozen, we were all over it,” Heckler said.

However, in the 1960s, there was a movement to develop the land near the mine pit. Wyomissing Industries had sold the land to the Masonic Centre Foundation, which had plans to build a temple. The landowners were worried about the liability of having a large lake there, Meiser reported.

The decision was made to remove the lake by filling in the hole, an idea that locals expected would end only in folly.

“We always figured they would never fill it in,” Heckler said.

But trucks hauling cement and construction debris from Reading’s many downtown redevelopment projects began dumping the materials in the hole, and the lake began to disappear.

By 1971, the lake was gone, leaving those Norman Rockwell scenes visible only in childhood memories.

The Body That was Not There

On December 26, 1967 a 23-year-old practical nurse that was employed by the Reading Hospital disappeared after her shift. Investigators believed that the body of the woman, named Patricia Sholley could be in Weiser Lake. On December 27 and 28, members of the Reading Fire Department’s SCUBA team searched the perimeter of the take. By December 30, an estimated twenty-five divers entered the icy waters, in 31-degree temperatures, for more than four hours. The search was eventually suspended when Walter Schmitz, chief of the divers, said she was definitely not in the lake. The bottom of the lake was nothing more than twisted reinforced steel rods.

As the search for Sholley continued, Pennsylvania State Police troopers arrested Maurice M. Talley on Friday, December 29, 1967. The 25-year-old was a former Reading Hospital orderly. Early reports on his arrested surrounded the fact that he was accused of assaulting Sholley near the hospital’s accident dispensary at 06:40 on December 26, twenty-two minutes before Sholley disappeared.

After 24 days the search for Patricia M. Sholley came to an end on January 19, 1968, when her body was found covered in snow off of Route 895 near Summit Station, Schuylkill County. Talley was sentenced to life in prison for the murder of Sholley on September 6, 1972.

Growing up in the late 50’s early 60’s I never heard it referred to as Weiser Lake, it was always called the Mine Hole by us kids. I remember rumors of fire trucks and carriages being sunk there and that it was bottomless!

My husband used to ice skate there all the time while he was a student at West Reading High School. I’m sure I have a photo somewhere.

I remember being told it was bottomless.

Thank you!! This was really neat to learn. Thanks again

Spent much of my childhood swimming and fishing in the Mine Hole. Never caught anything but Sunnies.