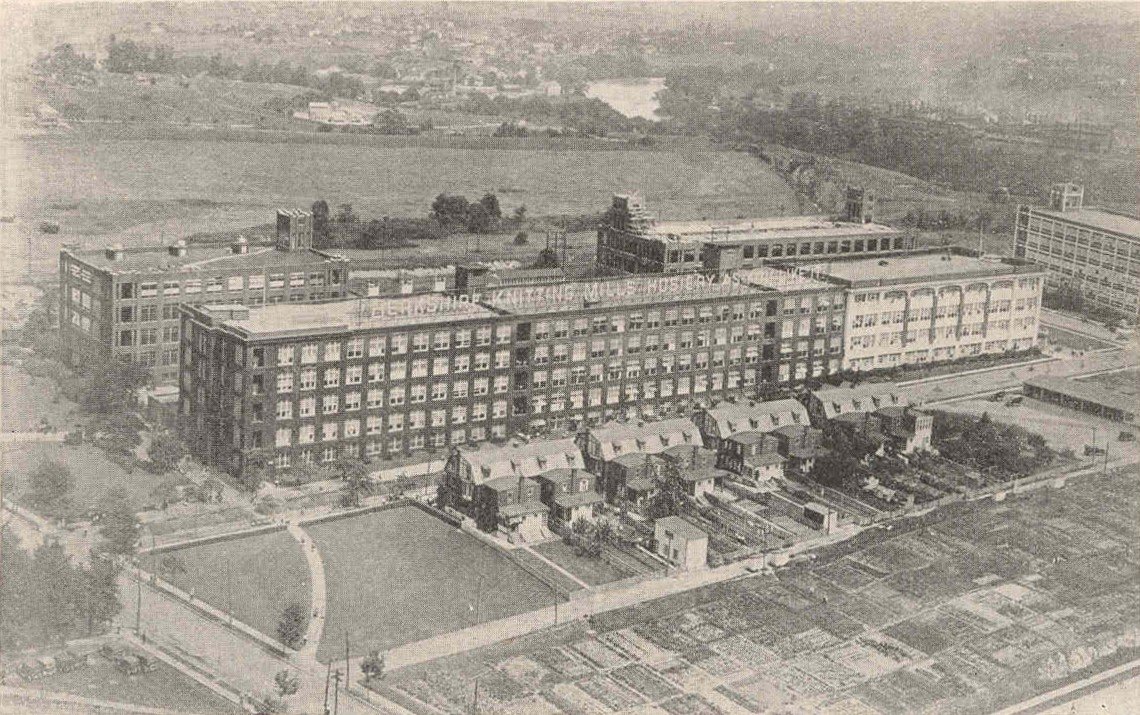 In 1892, “Textile Machine Works” was founded by Ferdinand Thun and Henry Janssen on Cedar Street in Reading. In 1886 they accepted an offer to relocate to Wyomissing, where they were sold a site for $1, in hopes their industry would spur interest in building lots. In 1899 they incorporated as the “Reading Glove and Mitten Manufacturing Company”. By 1906 Berkshire Knitting Mills was incorporated, formed as an experimental mill by Thun and Janssen, to test the knitting machines Textile produces.

In 1908 they built their first building, (today’s “Red” building at VF), which originally had three floors. Two more stories were added by 1914. In 1922 parts of the “Blue” building were completed and used at a finishing building. By the late 1910s business was booming due to demand for full-fashion hosiery and WWI trade embargoes from products from German Knitting Mills.  Five more buildings were erected by 1925; a general office, two garages, a cafeteria, and medical dispensary.

Tragedy struck in the mid 1930s, during a bitter strike that turned violent at the mill. The American Federation of Hosiery Workers called for a 13-month strike  to unionize the workers in the mill. It resulted in the death of worker M. Earl Schlegel, injuries to dozens more and destruction of plant and workers’ property. Even through all of the unrest, the plant never was unionized.

In 1939, Nylon was invented. Due to restrictions during World War II, widespread production does not begin until 1945. Thun and Janssen are skeptical about the trend toward seamless stockings, assuming women would always prefer the full-fashioned kind. Due partly to miscalculation and the trend toward mills in the South with their cheaper labor, the decline of the Berkshire Knitting Mill began.

In 1969, the mills were sold to Vanity Fair Mills. The outlet store was created almost by accident, when then CEO wanted to open one Saturday to the public to sell off some surplus items. It was a huge success, so they opened the nation’s first factory outlet center, VF Outlet Village. Since then, the corporation has opened 79 more stores in 31 states nationwide. The production of goods continued in Wyomissing until 1998, when VF Corp decided to move production to Greensboro, SC. The VF Outlet stores enjoyed great success until the late 2000s, in which it started to decline in sales. Since moving the factory to South Carolina in 1998, products sold in Reading were no longer surplus products, and therefor not as competitive with other stores in terms of pricing.

Earlier this year, the VF Outlet buildings and land were acquired by a new owner. There are currently development plans in the works to turn much of the area into a campus for UGI and home to new restaurants and shops. Most of the “Blue” building and the entire “Red” building are set to be demolished late 2017. Please go and view this piece of Berks County history before it is gone forever.

Edit: it has been demolished and redeveloped as of 2018

Did my apprenticeship at textile machine works. Also visited the textile inn a couple of times

My grandmother worked there when she was young (when it was still the Berky). My sister and I worked there (as VF Outlet) 50+ years later. I found a few newspaper articles about the development, but no specific date of demolition. I’ll have to go back home to Reading and see it one last time!

One MORE piece of Berks County history to be removed and destroyed. If it’s kept up pretty soon there won’t be any historical sites left in the county.

NAFTA and GATT meant by the phrase: “remove trade barriers”, Another word for trade barriers is obviously borders. Contrary to what some of the more confused posters here seem to imagine, this destruction of US production is 100% bipartisan. The two wings of the Wall Street dictatorship just use slightly different rhetoric in order to fool slightly different people. They’re all stupid though, so it’s really not a significant distinction.

[…] Read about the history of the Berkshire Knitting Mills […]

[…] Knitting Mill was once Berks Counties third largest knitting mill, behind Berkshire and Textile. It was opened in 1914 as a manufacturer of men and women’s stockings by a man named […]

[…] Below are aerial photos of Wyomissing. The first was taken in 1932, when the Reading Hospital Building was brand new. Pictured in the distant right is the Berkshire Knitting Mills. […]

[…] The old red building was just demolished the other day, to make room for parking for what will be UGI’s new headquarters. Now is as good a time as any to take a look at it’s history, which encompasses over 100 years of use. […]

This was one of the industries that made Reading and Berks County prosperous. The evolution of industries is interesting to watch. There were several generations of workers who thought getting a job at Textile or Berkshire was the answer to their dreams

[…] in existence. Happy Hollow was built with funds from Janssen and Thun, prominent owners of the Berkshire Knitting Mill back in the early 1900s. They built up most of Wyomissing, as a place that was family-friendly for […]

Comment: Hello,
I have something that may be of great interest to you. I recently came upon something very unique to Reading, PA. My mother-in-law’s neighbor moved out of his home recently and into a nursing home (lives in Land O Lakes, FL) . Bob was about 72 years old and had family roots to Reading, PA. I have acquired some of Bob’s personal items. One item I have is a Vintage metal foldable Stereoscope viewer made in Germany, along with a book of 36 black and white photos of the Berkshire Knitting Mills. They were all taken in the 1920’s, shows many different people working in various departments, cafeteria shots, the main buildings outside, kitchen, the officers of the co. Thun, Janssen, and Oberlaender, sales dept, etc. Very interesting photos and really of no interest to me. I have an ebay store and was going to put them on auction and sell the scope and photos all together. Is this something you would like to purchase from me directly before I list them on eBay? Such a wonderful piece of history. I was wondering if maybe your Grandmother is in one of the photos. There are quite a few photos of women working in each of the departments. Please let me know if you are interested in buying these, I could send you some pictures showing what I have. You can contact me via my email: [email protected]