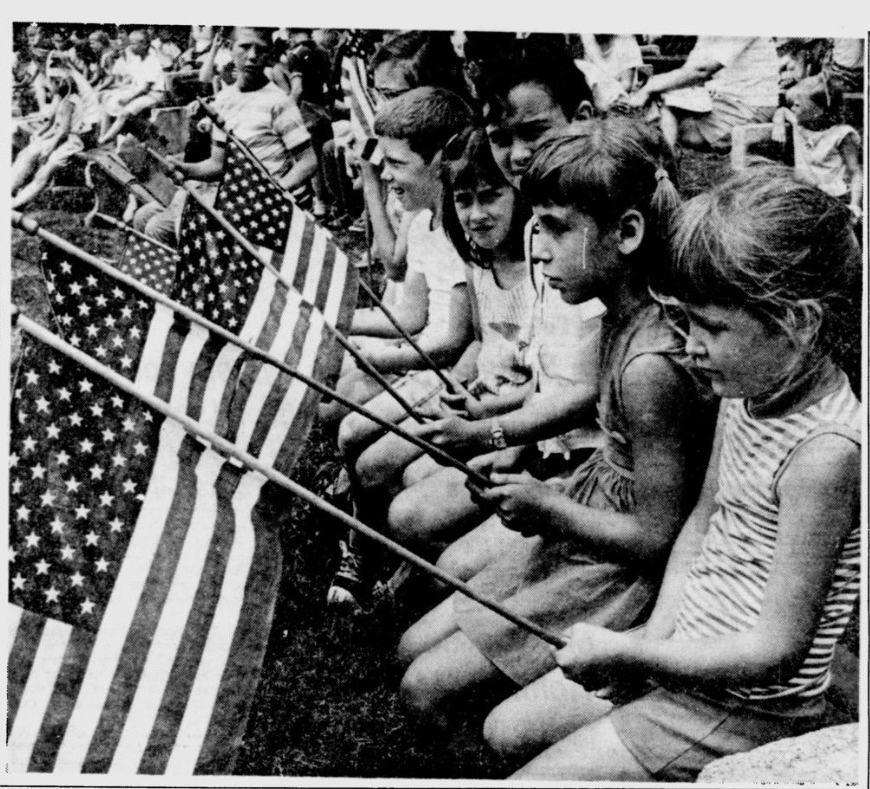 West Reading’s Fourth of July celebration yesterday was a double event. Besides celebrating the holiday the citizens and various organizations in the borough joined in a program in observation of the borough’s 50th anniversary. A spectacular feature of the day was the parade which was held in the morning. Shown above is one of the marching groups as the parade moved along Penn Avenue. (Eagle Staff Photo)

Four hundred and fifty-seven children participated in the Fourth of July program sponsored by the city recreation bureau at the City Park bandshell Thursday afternoon. The children, walking to City Park from their respective playgrounds, wore costumes of their own design and carried flags in the patriotic march.

Oakbrook housing, Baer Park and Barbey’s win the top three honors in competition involving number of participants and distance traveled. At the bandshell, appropriate songs were sung and Uncle Sam’s birthday cake was lit. In the left photo, David A. Salvi, dressed as America’s best known symbol, admires the simulated stars and stripes confection, while one playground group, in the right photo, offers an Independence Day songfest.

Below, members of the Brookline playground sport small replicas of Old Glory as they witness the proceedings. -Eagle Photo

As usual, Lancaster Avenue and the New Holland Road intersection was turned into a lake during Tuesday afternoon’s series of thundershowers. Just as regular are these two youngsters who took advantage of the cool water to escape from the humid weather that preceded the deluge. – Eagle Photo

Oh this brings back memories. Like the 4th of July carnival at Pendora Park, and the fireworks later that night. Then I was reminded of all the playground programs and activities, like the folk dancing and the lantern parade in City Park. Thank you!