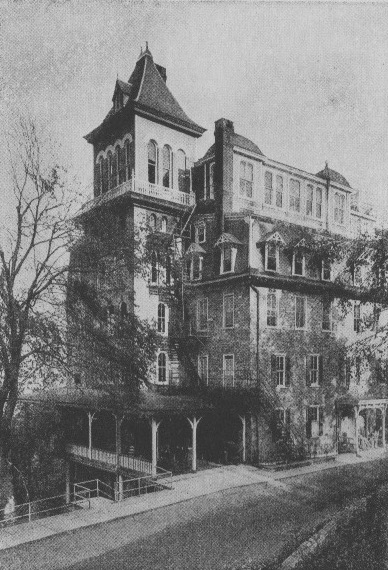 There is a dense, dark atmosphere on the windy roads that once led to old sanatoriums that graced the wooded South Mountain below Wernersville. If you have ever driven around up there after nightfall you probably know what I mean. The mountain is rich with history, but the oldest and some of the most frightening surrounds the Grand View Sanatorium.

Grand-View was the oldest health retreat on the mountain, dating back to 1847 when it was founded by Dr. Charles Frederick Leisenring. He originally named it Berks County Cold Springs. His tenure was a brief 12 years, as he died in 1859, presumably at his residence on the property of the Sanatorium.

In the 15 years following Dr. Leisenring’s death the property was leased out to a few different doctors to run and maintain. The property was purchased again in 1873 by a man named Aaron Smith, who named it Hygiean Home and also sometimes marketed it as Mountain Home. Smith ran it for 6 years until he went bankrupt in 1879.

It was purchased at Sheriff Sale by Dr. James Deppen and Dr. Rueben Wenrich for $14,700, which today would equate to around $382k. They continued calling their new property Mountain Home. Shortly after their new venture started, tragedy started to strike the health resort.

Only a little over a year after moving in, two of Dr. Rueben Wenrich’s children; 13 year old Allie and 1 year old Christie Ann (aka Sallie) contracted diphtheria. Both children passed away within five days of each other in the sanatorium in March of 1880.

1881 was a happier year, in which Rueben and his wife, Sarah, welcomed the birth of their youngest child, a son named John. He would grow up to become doctor along with his older brother George. Together they would work under their father for the last remaining decades of the Sanatorium’s existence. It was at this point around 1881 that they changed the name to Grand-View (or Grand View +/- Sanatorium/Sanitarium all interchangeably).

1882 was again a year of tragedy.  Another daughter of the couple named Emma died at the age of 6 at Grand-View of unknown causes. Out of the seven children Rueben and Sarah had together, only three made it to adulthood. A total of three died at Grand-View within the first four years of owning it.

The wealthy looking for fresh air or treatment flocked to the Grand View Sanatorium and its neighboring resorts in the late 1800s into the turn of the 20th century. Trains brought them into the Wernersville Train station that still exists along 422. From there they would be transported up South Mountain to the various resorts, and one of the largest and most popular was Grand View.

In 1890 the infamous Grand View Chapel was built right down the road from the main hotel building.

In 1895 Rueben’s partner, James Deppen, died. At that point ownership was transferred completely to Dr. Rueben Wenrich after he bought out the shares of the business owned by James Deppen’s estate.

Sarah, the wife of Rueben passed away in February of 1896. I imagine her soul weary from losing over half of her children. I could not find a specific mention of the reason of death. She was only 48, so one has to imagine that it was disease or some sudden tragic event. Rueben added a large white marble stone memorial to the Chapel’s wall in memory of his late wife. Some believe he never fully recovered from losing her.

Dr. Rueben Wenrich threw himself into his work after the perishing of Sarah and their daughters. He erected structures and purchased adjoining properties for the next three decades. This included a dairy farm at the foot of South Mountain which was named Grand View Dairy Farm. It is still in operation today under ownership of a different family. The total acreage of the Grand View complex was roughly 600 acres by 1926.

Rueben also died at Grand View in September 1926 at the age of 84. He was the fifth and final member of his family to die at the sanatorium. Being a health resort the property saw sick visitors all the time. It is not outlandish to believe that many other patients at the sanatorium also died on the grounds from various illnesses. Who even knows what that number could be.

Sons George and John abandoned Grand View after their father’s death. It is unknown why, or what made them up and leave but the building sat unused and abandoned for decades. It was purchased in 1948 by the Bodanza brothers, one of whom had married into the Wenrich family when the Sanitarium was in business. They continued to let the buildings on the grounds sit and deteriorate. Through the 1950s and 60s people still picnicked on the grounds. The main hotel building was unlocked and it wasn’t uncommon for people to walk through it. It wasn’t surprising that property began to attract attention from teenagers due to the lore that formed around the creepy old vandalized buildings; particularly the chapel.

Teenagers of the early and mid 1960s might be able to tell you stories of going into the abandoned chapel at night, and maybe seeing a noose hanging from the ceiling. The meat locker right down the street was another source of urban legend. Allegedly at night you could hear children’s screams coming from within.

The main building, a seven story hotel, was so beyond disrepair that the owner burned it in a controlled fire on February 18th 1967. The only structural remains left today is an elevator shaft right along Grandview Road. The reason this survived the fire is because it was the only part of the building reinforced with steel rods inside the stone walls.

The Chapel building was eventually converted into a private residence and the land subdivided and new homes built on it. But that wasn’t the end of tragedy at Grand View.

The next part of this story I am going to omit names for privacy reasons, as many of the people involved are still alive.

The lore continued to grow around the area, and generations of teenagers would attempt to explore and drive past at night during witching hour. In June 1995 a car full of teenagers was driving up and down the road past the ruins and chapel. The owner of the chapel residence at the time, tired of the attention his property received, came outside with a gun and shot point blank into the back passenger window of the vehicle. The boy sitting in the back passenger seat was hit in the head by the bullet and subsequently killed.

That is the very brief but true cliff notes of that sad event, and there is an entire rabbit hole to dive down with that story alone. Google it if you dare to dive deeper.

People have reported to see and hear strange things around South Mountain at night. It is no wonder, with all the energy that might be left residing there after a century worth of untimely death.

Really enjoyed your article. As a youth I spent many hours wandering through the remains of Grand View never realizing the historical value and what it meant to the development of Wernersville.

Talk about enhancing the spirit of Halloween. And a great intro video.

Another near tragedy that was included in our book on the history of the resorts was the collapse of scaffolding while building the 1898 elevator shaft addition to the building but fortunately the men survived. Nice video of the area along with the interesting collection of information assembled for this story.

I grew up on the mountain and we walked past the chapel, the remnants of the sanitorium and the meat locker. When I was in elementary school at South Heidelberg, I had to write a fiction story and I wrote about the chapel being haunted.

I grew up on that mountain and there are sooo may stories about the buildings, most of them are embelished, very nice to hear a factual story!

Well done, I enjoyed your information and tour, I used to work at the old Green Terrace Hotel (on the corner of Galen Hall and Preston roads across from the Old South Heidelberg Elementary School) the hotel was known for its Chicken and Waffles. In later years the hotel became Ann’s Guest Home, then Danken house which was a personal care home., where I worked a live-in job for 10 years, I learned to drive stick shift on those back roads and would up around the ruins up there pretty often.

I grew up on Grand View Rd. We used to explore all of those places as kids. It’s such an interesting history and sad that those who remember it best are gone from us now. I wish I could ask them more questions now that I’m older and understand the significance of these places.

Thank you for your post! I learned of the sanatorium as a result of discovering that my g-g-grandfather stayed there in 1905 (see the latter part of my blog post: http://plugsandpixels.com/geneblog/index.php/2018/11/29/the-mearas-settle-in-jersey-city-for-over-a-century/)