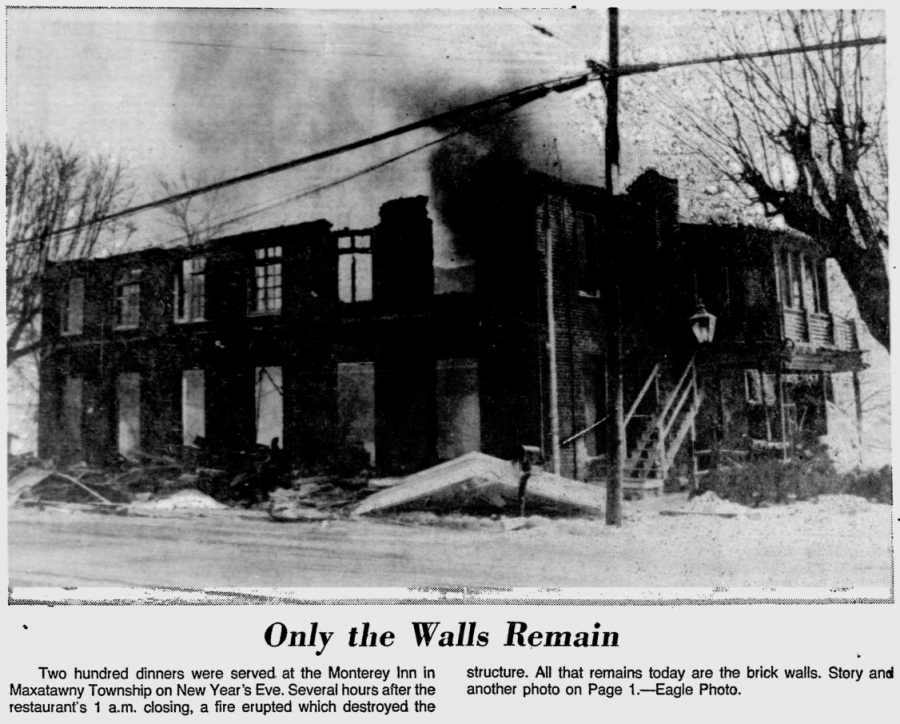 The Monterey Inn was built in the 1920s on the foundation of a building destroyed by a fire. It was located along Route 222, right before Church Road bears right in Maxatawny Township. It was originally built sometime after the 1830s by Isaac L. Bieber. Before and after burning in the 20s, it served as many different businesses; a hotel, a post office, general store, and gas station. In 1947, Jay W. Haslam acquired the building started the Monterey Inn. Jay’s son, Robert P., took over the business in 1951 and operated it until it was destroyed by fire in 1977. The site is now home to the Kutztown Animal Hospital.

A collapsed porch, charred wood and icicles on the gutted building are evidence of the fire which destroyed the Monterey Inn along Route 222, northeast of Kutztown, early New Year’s Day. Firemen from five companies spent seven hours in frigid temperatures battling the blaze but were unable to save the building. Eagle photo by Owen C. Stoudt

Two hundred dinners were served at the Monterey Inn in Maxatawny Township on New Year’s Eve. Several hours after the restaurant’s 1 a.m. closing, a fire erupted which destroyed the structure. All that remains today are the brick walls. -Eagle Photo