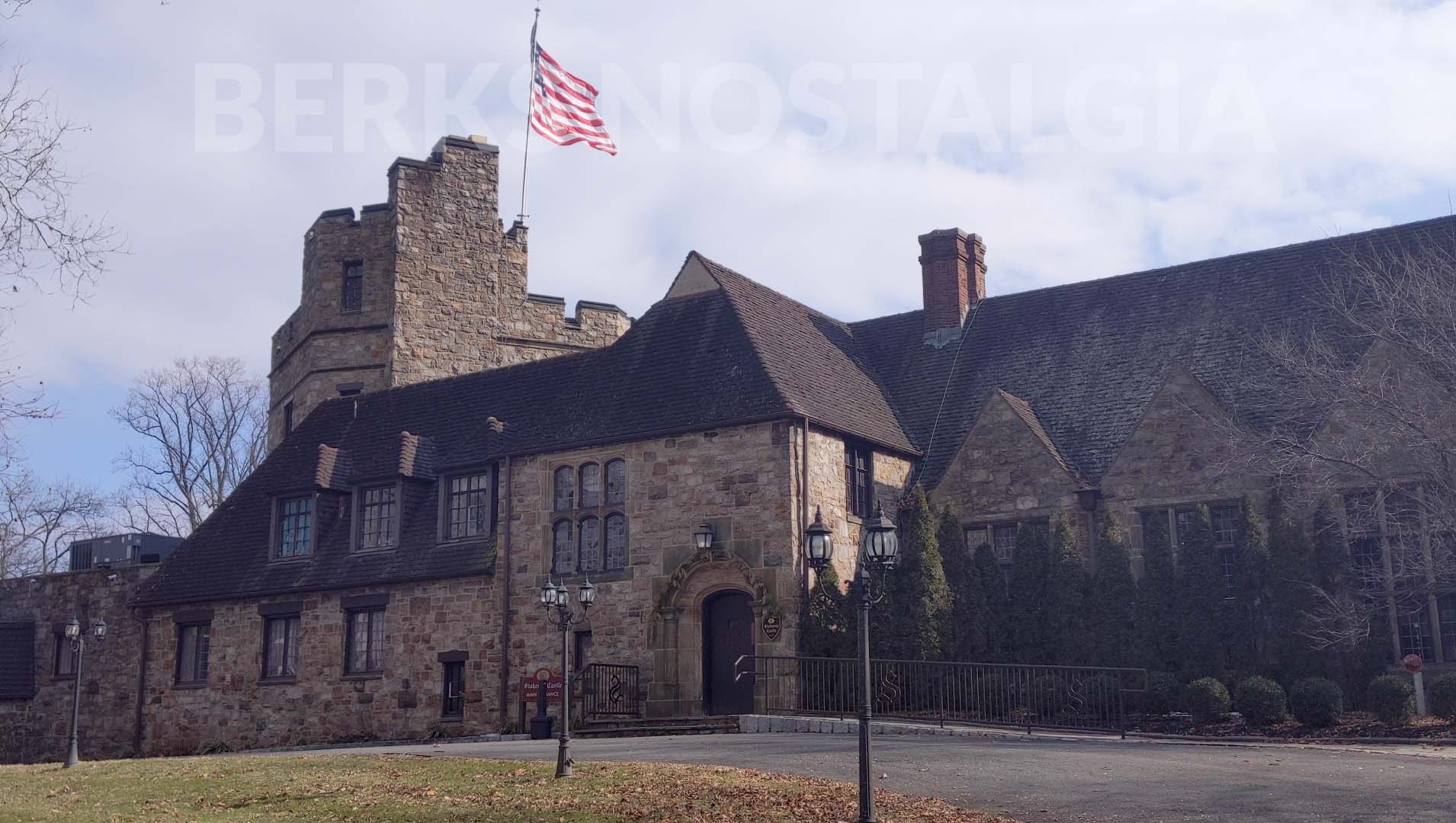 Stokesay Castle has been a staple  of formal dining and event space in Berks for a long time. But how does an old English castle end up nestled in the woods of Mount Penn, of all places?

You have probably heard in passing that the place is haunted, and being a Castle on a road called Spook Lane you can’t help but hope it is. Rumors of romance ending in suicide have been passed down through time as a reason for the possibility of a roaming spirit. However the true story is a little more complicated and way more interesting than that.

In October 1931 George Baer Hiester purchased two of the three pieces of land that Stokesay Castle would be built on. Having freshly graduated from Yale University the spring before, he  came home to Reading to start his career. He was engaged to Anne Hall Nicolls, daughter of Frederick Nicolls and Minnie Taylor, a prominent wealthy family in Berks County. They would be wedded a little over a month later on November 27th, 1931. But to get a better idea of who these two young lovebirds were, lets go back even further.

They were both born in 1909 in Reading, Anne on February 25th and George less than two weeks later on March 7th.

Anne’s father died when she was only two years old. About a year before his death and when Anne was an infant they purchased a new family home at 1531 Mineral Spring Road. She and her three older siblings would be raised there by their mother, who hired a governess to help look after and privately educate them after Frederick’s passing. Eventually she was sent to Oldfields School, an all-girls private school in Baltimore County, MD from which she graduated in 1927.

George was born to Isaac Hiester and Mary Kimmel Baer, the culmination of two very prominent and well known families in Berks. After the death of his maternal grandmother in 1916, the Baer estate known as “The Hawthorne” at 1501 Mineral Spring Road (now known as the Hawthorne Home)  was inherited by the five Baer Daughters. His mother bought out her sisters for the family home and moved Issac and their three children into the stone mansion.

George and Anne were only seven years old when their families became neighbors. George would also lose his father at a young age, in 1921 when he was only 12 years old. Coincidentally Anne also lost her older brother that year to Tuberculosis.

After the death of their father, George’s mother took him and his siblings on a trip to England in August 1922. They ported in Southampton, which is only a 3.5 hour drive from the original Stokesay Castle, a 13th century manor house in Shropshire, England. It is this trip in which he visited and fell in love with the castle which he would eventually attempt to replicate as a gift to his future wife. At the time he saw that castle they were both 13 and she was just the girl next door.

George returned and began his secondary studies at the prestigious Hill School in Pottstown. He would graduate in 1927 and continued his studies at Yale. It was at some point during college that him and Anne were engaged. There were various lavish events in the weeks leading up to their nuptials. Their ceremony took place on November 27th, 1931 at Christ Episcopal Church at 5th & Court Streets in Reading.

George enlisted the help of his cousin, architect Frederick A. Muhlenberg II, to design him a replica castle to the one he had seen nearly a decade earlier in England as a boy. Stokesay would be completed in 1932. George and Anne welcomed their first and only child together, a daughter they named Robin, in 1933.

The legend states that Anne hated the Castle and resented George for building it without any input from her. Whether there’s truth to this is undocumented, but their relationship deteriorated rather quickly and Anne initiated their divorce proceedings. Their marriage ended in October 1936, only five years after it began, but two decades after becoming neighbors as children.

Newspaper clippings from the June 27th, 1936 Reading Times, just four months before the divorce, show both George and Anne in a friend’s wedding party with a man named Ferdinand K. Goetz. Ferdinand was of another prominent local family, and lived with his uncle and aunt George and Emma Horst of the well-known Nolde and Horst Hosiery Mills.

After divorcing George, Anne went on to marry Ferdinand Goetz in the spring of 1939. With him she had a son, Peter in 1941. Their family home on Philmay Terrace was not even 3000 ft down the hill from Stokesay in Mount Penn.

Tragically, in 1949 Anne ended her own life. She shot herself in her Philmay Terrace home at 1:45 in the morning on Feb 7th, just a few weeks shy of her 40th birthday.

Just a month after Anne’s passing, George married a New York woman named Marjorie Ruth Petersen on March 18th, 1949. Their marriage was very brief, I was unable to find any record of her residing at Stokesay.

Is the castle itself truly haunted? Well I can’t find any proof that anyone actually died there. George spent almost a quarter century as the main resident of the house.

In 1952 George married for a third time to Maine native, Barbara “Barbie” Ross. They lived together in Stokesay for another four years.

George sold Stokesay in 1956 to Stokesay Inc., the company that would begin operations as a restaurant. He purchased a lot on Grandview Blvd in Wyomissing Hills which was being developed at the time. He built a modest rancher in comparison to a castle. He would also die in this dwelling 6 years later in 1962 at the age of 53 from cancer. Could it have been his spirit returned to the castle to wander the halls?  Is it possible for our spirits to imprint on a certain place so important to us in life that the actual place of our death has no bearing on where it end up? Who knows.

Stokesay has undergone major changes since the Hiester’s left in 1956. A banquet hall was constructed in the 1960s which has hosted numerous Berks County wedding receptions since. In 2007 the original owners were forced to close due to bankruptcy. It was purchased in 2009 by Jack Gulati and operations were resumed after he completed some necessary renovations and upgrades.

In 2011, the original architect, Fred Muhlenberg’s firm Muhlenberg Greene Architects was hired to design another addition to the building, the Knights Pub. The addition was constructed 80 years after Fred’s original conception of Stokesay became reality. Yet, it is safe to say the memory of these well-to-do Berks Countians and their seemingly dramatic and luxurious lives live on not only in legend, but now truth.

Isn’t there another piece to this story about how George built a much smaller house down the hill in what is today’s Hessian Camp to placate his wife’s refusing to move into Stokesay Castle? It’s the same house I grew up in 30 years later.

There are no deeds bearing his name within the years of his marriage to Anne that can substantiate that. Also every reference of them in the paper lists them as living at Stokesay. If you want to privately email me the address of that house I can trace it’s deed back and see who built it.

Ah, another childhood folklore bites the dust! Thanks for researching this, Alexa.

Always enjoyed going to Stokesay. Our wedding reception was held there in 1987 – beautiful place & surroundings!