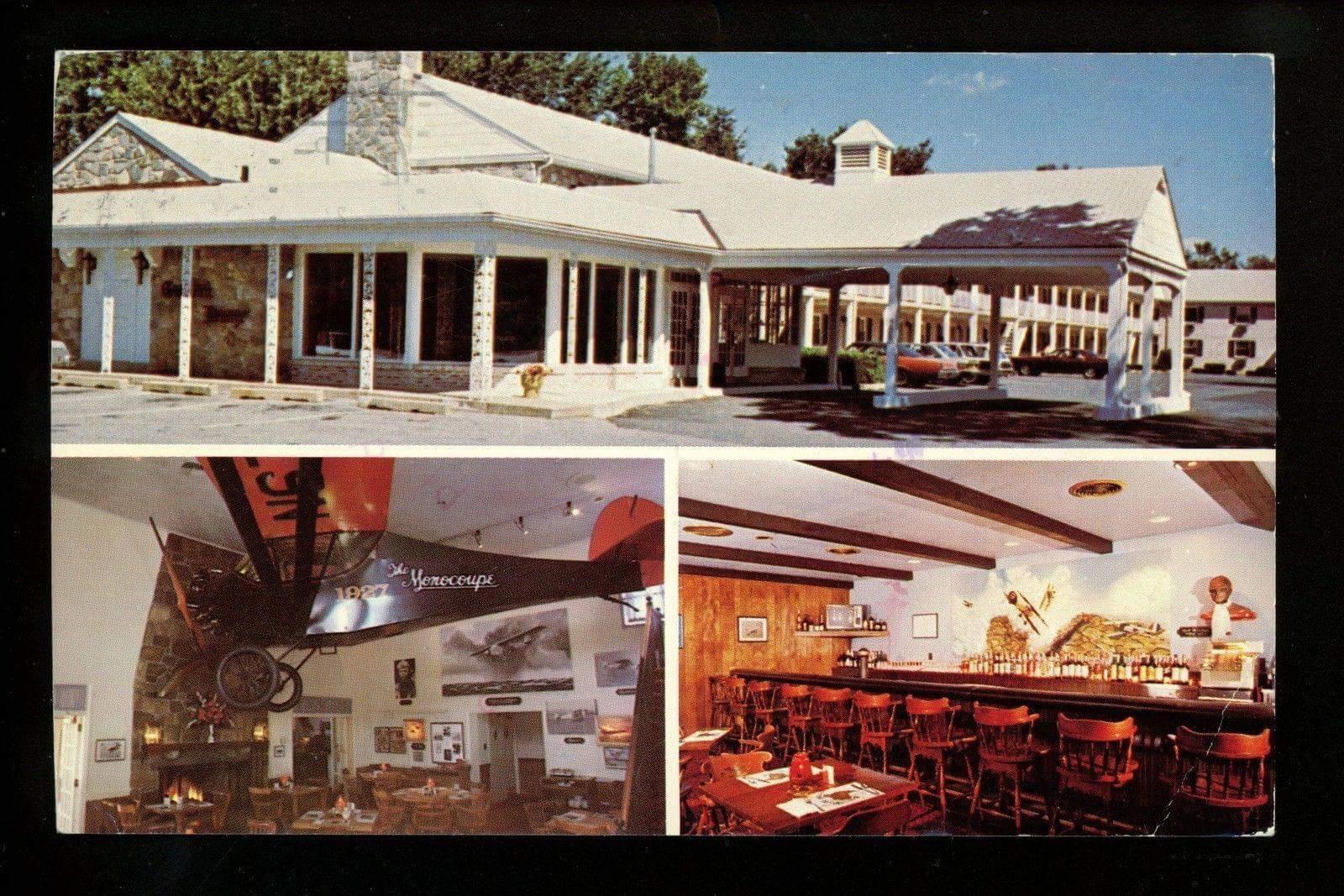 The Dutch Colony Motor Inn started operations in 1964 by Erna and R. Harding “Breity” Breithaupt. Breity Breithaupt was an aviation pioneer and owned Reading Aviation Service at Reading Regional Airport. A few years after opening they added the Antique Airplane Restaurant, named fittingly due to a 1927 Monocoupe, last flown in the 1966 Reading Air Show, hanging from it’s ceiling inside the restaurant.

The Dutch Colony Motor Inn was closed and demolished in 2007, to make way for the Exeter Commons shopping center along Perkiomen Avenue. Now, yet another strip mall stands in it’s place.

What happened to the plane, you ask?

Berks County, PA –  The antique airplane that “flew” over diners’ heads for 40 years finally made a landing Tuesday at the Dutch Colony Inn & Suites.

The 1927 Monocoupe had been suspended from the ceiling of the hotel restaurant since 1967 after it was bought and restored by former Dutch Colony owner R.H. “Breity” Breithaupt.

The Exeter Township business closed Monday, and the property is expected to be cleared for a shopping center.

The plane, the namesake of the Antique Airplane Restaurant, was donated to the Golden Age Air Museum in Bethel.

Museum President Paul Dougherty Jr. said volunteers usually pick up old planes in pieces from hangars and garages. This was the first time they extracted one from a restaurant.

Volunteers started removing the plane Tuesday by disassembling the propeller and tail. They lowered the 753-pound plane to the floor using two jacks. Once the plane was no longer airborne, they removed a wing so the aircraft would fit through doorways.

“It was real interesting getting it out,” Dougherty said. “We didn’t have to put butter on the sides of the doors, but it was close.”

Dutch Colony co-owners Kenneth M. and Jamie B. Wagner were anxious about the plane’s departure, but they were pleased it landed safely without a scratch.

The dining room looks vacant without the plane hanging from above, Jamie Wagner said, adding that Tuesday was the first time she had seen it grounded in 40 years.

Museum volunteers loaded the plane onto an open trailer, and another trailer was used to haul the wing.

By next spring, the plane will fly again, Dougherty said, explaining that the aircraft is in excellent condition but will need work to be ready for flight.