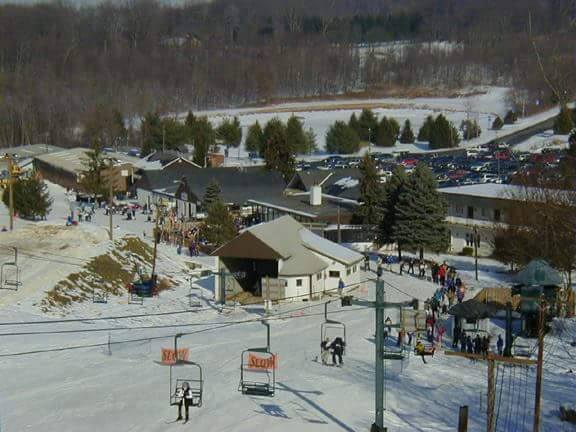 Winter is coming…which means the snow sports season is almost upon us. There is only one ski resort in Berks County, and it is currently known as Bear Creek. The resort opened in 1967 and it was known as the Doe Mountain until 1999, when it became Bear Creek. The name was changed from Doe Mountain as a marketing strategy to avoid being characterized as a small ski area. Source Wikipedia

Below area few photos from the 90s when Doe mountain was still a smaller mountain. It has come a long way since ’99, with the building of a large new lodge and spa, as well as many new ski slopes and a tubing hill.

I spent several days in 1968 and maybe 1969 progressing in my learning to ski at Doe Mountain. My real learning was at Chadd’s Peak in very northern Delaware with a rope tow. I loved every moment at Doe Mountain and at Chadd’s Peak. Back then I don’t remember a chair lift, the lift at Doe was a Poma “lift”. It was an advancement over the rope tow, being that one stayed with their skiis on the snow and as one stood on their skiis you would either put the disc between your thighs and let the “lift” gently pull you by your butt. The very similar lift was a bar that you pulled next to your upper thigh and it would pull you by the butt. Both required the skiier to remain upright and not sit and of course the natural response to an object that felt like a chair was to sit. So I would sit and fall. It was a little embarrassingly to fall, however I was born and raised in New Orleans and snow was very special fun and falling wasn’t so bad. I was living in the far north as I was in the US Air Force at Dover Air Force Base (I was essentially conscripted). These are such pleasant memories.

I remember the song on Y102… “Doe mountain is…. the fastest way to hit the slopes!”

[…] Ski Area was one of the pioneering ski areas that allowed them beginning in 1992. The same year, Doe Mountain (now Bear Creek) allowed snowboarders as well, but only on […]

The general manager at the time, Dave Merkey, had extra snow shovels on hand to lend to snowboarders who wanted to build their own runs and terrain. He would sell them a lift ticket and then watch the snowboarders spend the next couple of hours designing and building their own mini-terrain park. Dave was years ahead of his time!

I worked as a lifeguard there at the pool in the summer of 1974, I think the Philadelphia mafia owned it but they were real nice to me.

My mom and dad lived above the ski patrol building ,my sister Starr swam in that pool,my dad was the care taker of the ski area from 1965 to 1997

I enjoyed skiing at Doe Mountain in the 80s.