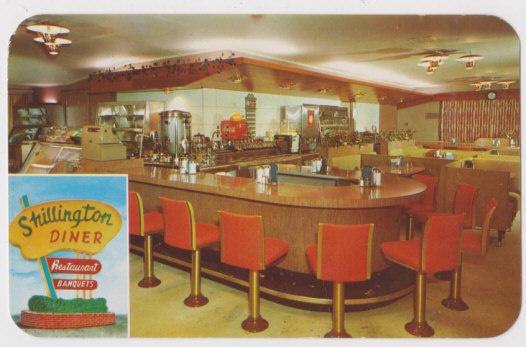 The Shillington Diner can trace its roots back to the farmers market located at Museum Road and Lancaster Ave that opened in 1935.

The Shillington Diner (later Restaurant) was built onto the market at 100 W Lancaster Ave and opened in 1948. In the beginning it just sold simple lunch foods for hungry customers visiting the market. It was torn down in the early 2000s and replaced by a Wawa. The property was sold when the original owner, Theodore Ludwig, passed away.

The Farmers market moved further down Lancaster Avenue in the Shillington Shopping Center in 2001 under ownership of a descendant of Theodore Ludwig. It was a shell of its former self and declined until a new owner purchased it in 2017 and revived it. It is still in operation today.

The Shillington Diner served typical diner food. Fried chicken, various seafoods and steak can be seen in the menu below. They also advertised themselves as serving traditional Pennsylvania Dutch dishes; 40 different hot and cold foods and all you can eat.

[…] Diner sat on the corner of  Lancaster Ave and Museum Road in Shillington, across from the Shillington Diner. Currently, a Wallgreen’s and Wine  Spirits store strip mall sit in it’s place. For […]

Loved the place.The food was excellent.

My family dined there quite a few times while house shopping in Berks County and after we moved. All in the mid to late 1960’s. The food was quite good. It’s the only restaurant that I can recall that had “Schnitz und Knepp.” Made properly.