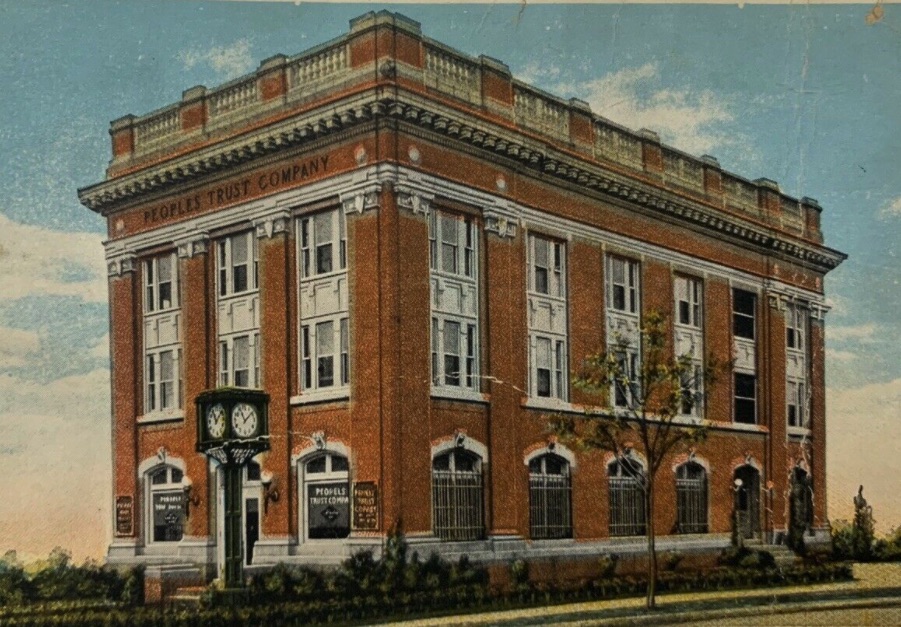 One hundred years ago today – February 4, 1921, six armed men stormed into the Peoples Trust Company of Wyomissing shortly before noon demanding everyone get on the ground. Three jumped the counter and forced clerks to open the vault by gunpoint. The audacious robbers didn’t even try to obscure their faces and were unmasked for the duration. It would end up being the largest bank heist of the 20th century in Berks.

The entire ordeal lasted 10 minutes, afterwards all six robbers threw themselves into a stolen Hudson Touring Car waiting outside the bank and sped away; leading local police on a wild goose chase that would last well over a month.

The initial report in the Reading Eagle on February 4th, 1921 reported that $40,000 was stolen from the bank. However by Feb. 8th the bank had determined that total to actually be $180,800 in cash and liberty bonds, which is equatable to around $2.6 million today. Luckily the bank was insured so there was no loss to the patrons who held their assets within its walls.

The drama that unfolded in the Reading Eagle in the days following the heist was as chaotic as it was cinematic. The Eagle initially reported the theory was that the robbers got away using the Bernville Road, backtracking into Reading, ultimately ditching the car and catching a train to Harrisburg. A group of 8 men who boarded a 12:20 train at Reading’s Outer Station within a half hour of the heist were initially determined to be suspects. Turns out they were the Reading High Boys basketball squad heading to a game.

Then there was speculation that they drove Bernville Road, through the city to Kutztown Road and all the way to Allentown. This was merely because residents of Kutztown Road reported that a speeding Hudson flew by heading north shortly after the robbery was reported. The day that story ran an anonymous letter was penned to the Editor of the Eagle. One of the alleged robbers wrote that they, “Had a good laugh over your yarn about going by auto to one Bernville Road and Allentown.” The letter was determined to be genuine.

The bandits were toying with authorities, and it wasn’t difficult considering every lead law enforcement had came from unreliable eye-witnesses. The Eagle didn’t seem to discriminate in which stories they chose to print, and in many cases different articles in the same daily had conflicting theories based on completely different people’s experiences and perspectives.

The more accurate story of their escape was eventually solidified by February 7th. In that account, the bandits drove past Textile and through North Wyomissing Heights (now Berkshire Heights), traveling at breakneck speeds and even taking a corner on two wheels as described by a witness. The robbers made what amounted to a pit stop at the culvert underneath a railroad bridge by the river to switch and dump the license plate. They then drove into Reading over the Schuylkill Avenue Bridge and ditched the vehicle at the corner of Church and Buttonwood Streets. However, their movements from this moment on eluded police for quite some time.

News of the heist reached national attention. The day after the robbery, detectives showed up from all over the region to try and solve the crime. This included detectives from the Burns and Pinkerton agencies, state police detectives, and private detectives who had heard the rumor of a large reward for the arrests of the fugitives. Berks County Detective Krick, who was the local officer on the case was described in the Reading Times as welcoming of all help and would not interfere with any detectives who came to work the case. “The object is to get the bandits”, he said in the February 5th 1921 Reading Times article, “I don’t care who gets the credit as long as the men are captured.“

It would take almost six more weeks and collaboration from all the detectives who came to work the case, but by March 17th, all of the bandits had finally been tracked down and arrested. Two were in Erie at the time of their arrest and the other four were located in New York City, including Stewart N. Wallace, who was believed to be the mastermind. New York police were quoted in the Eagle as characterizing Wallace as, “one of the most desperate and resourceful criminals in America, a man of good family, highly educated and the most daring criminal type.” He was wanted on murder charges in Detroit and New Jersey, along with various other hold up charges in New York. The men were extradited to Reading to stand trial.

All but $11,500 of securities stolen from the People’s Trust Company of Wyomissing on February 4th were accounted for with the arrests. The trials for the robbers were expedited, and four of the six were convicted of their crimes exactly three months after their arrests on June 17th. All six were convicted and sentenced by the end of September. Stewart Wallace, the ringleader, got the longest sentence of 20 years in the infamous Eastern State Penitentiary in Philadelphia.

There are too many twists and turns to fit this tale in this one post, so an expanded version of this article will be published in an upcoming issue of the Historical Review of Berks County. If you are not a member of the Berks History Center, consider joining to be automatically subscribed to the quarterly Historical Review publication to find out the full scoop.

Great commentary, and well researched. You really kept things moving in an exciting story from 100 years ago.
Looking forward to your future article in the Historical Review of Berks County.

what was the street address for this bank?

Now the location of M&T Bank—which, ironically, experieced its own robbery attempt in 2012.
http://www2.readingeagle.com/article.aspx?id=373460

This location was actually directly across the street from the now M&T bank, the M&T building replaced it. It’s long gone