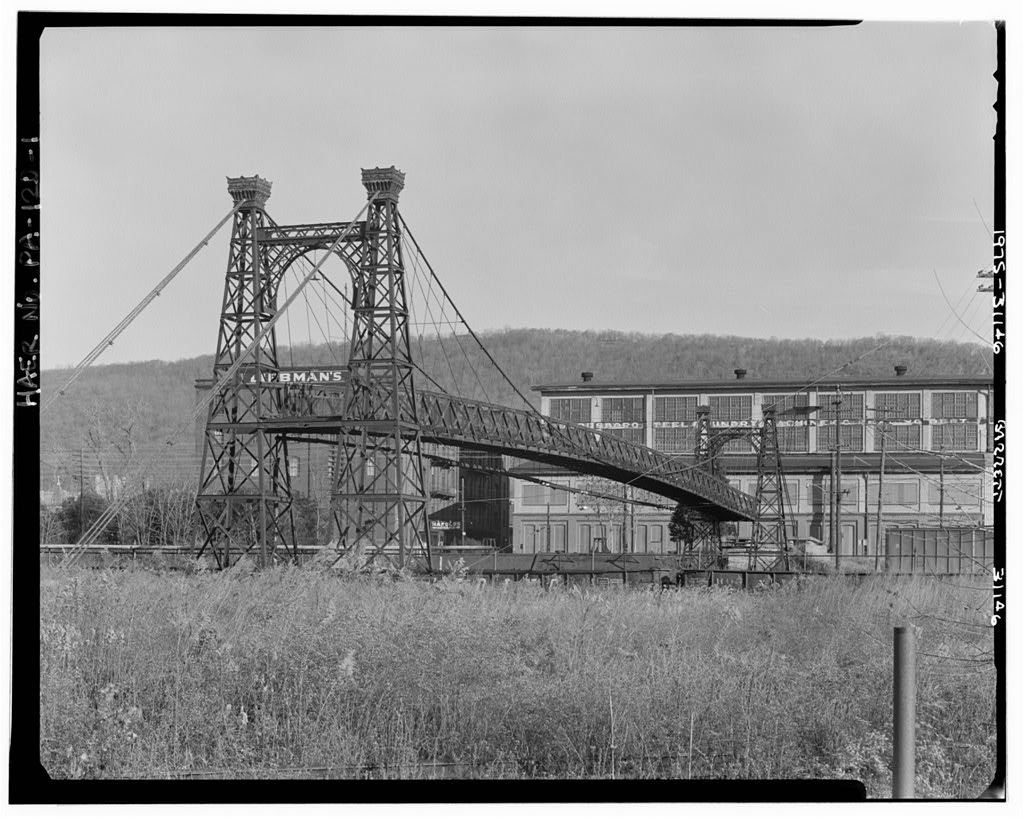 It was deemed the “Swinging Bridge” Built in 1874 by the same firm that designed the Brooklyn Bridge, Reading’s rail bridge was heavily used by pedestrians to get over the train yard to Reading’s Outer Station. According to this Reading Eagle article,

and yes, the bridge did swing…

“You and your friends could actually make it swing if you had the right rhythm,” he explained. “It would swing enough to make mom nervous.”

The Outer Station closed in 1969 and fell victim to arson nearly 10 years later. Still, the swinging bridge survived until 1983 when Conrail, the successor to the Reading Company, tore it down.

It turns out that when word got around that Conrail was going to tear down the bridge, a group of local engineers approached the company about taking the span, said Joel Caves, an engineer with Spotts, Stevens & McCoy in Wyomissing.

Not all of the bridge could be salvaged, but the group moved both towers to the Berks County Heritage Center in Bern Township.

The metal stood there until the early 1990s, when members of the United Labor Council were looking for a project to honor union workers, Caves said.

The Worker’s Memorial was completed in 1991, and the one tower has stood at Heritage Park ever since.

I was wondering more specifically where “Heritage Park” is where this single tower remains ? I tried looking on Google maps but it shows nothing more than the Berks Heritage Center but I’ve been there a hundred times and have never seen a tower like that there. Thanks for any information.

hey Gregg, Heritage park is on Canal Street all the way at the southern point of the city before the river. It’s very close to the tower’s original location. Here is a google map location: https://goo.gl/maps/rZL96cWNfNQ2

Thanks Alexa. I’ll need to put that on my bucket list of spots to check out.