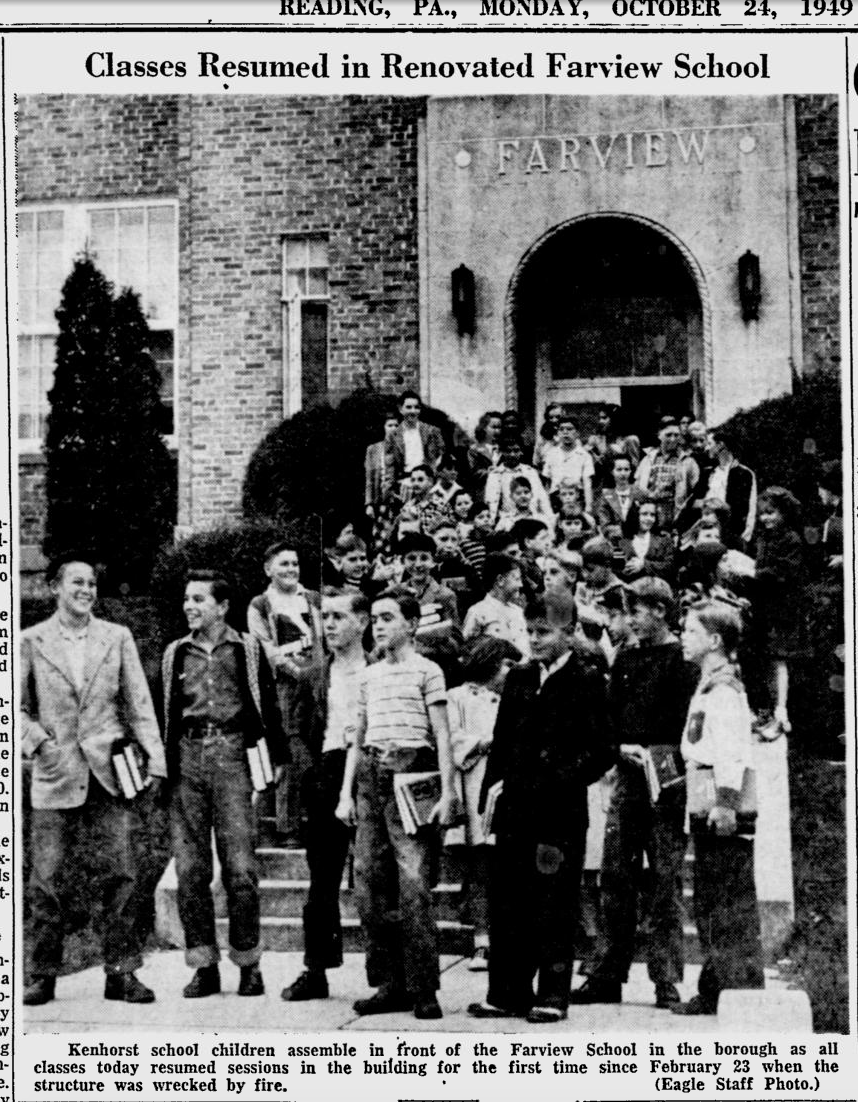 On February 23rd 1949 Farview Elementary school in Kenhorst was heavily damaged by fire. It was built in the 1930s. The school had a student population of 485 and was part of the greater Cumru Township School system. Aid was offered by neighboring Shillington and Reading school districts.

Classes were held in Oakbrook and Millmont Schools as well as the Kenhorst Fire Company while the building was being renovated.

It is unclear what the path to high school for children who attended these Kenhorst elementary schools was, as Kenhorst never had its own high school. Perhaps they got to choose between neighboring Reading and Shillington High Schools. Farview and all Cumru Township schools were merged with the the Shillington, Brecknock and Mohnton districts five years later in 1954 when the new Governor Mifflin School District was formed.

The school ceased operations for the Governor Mifflin School District in 1981 and was sold in 1987. Various private schools have occupied since. The building still exists today and is currently home to New Story Schools.

Grew up a block away from Farview, but I went to Catholic school. Farview had a great festival every May called “Fun Fair”. It was a great community event. My rock band provided entertainment mid to late sixties, if memory is correct. Kenhorst was a great place to grow up. Top notch playground, pools close by and the Pensupreme ice cream store. What more could you ask for?

I started 1st Grade in Farview in 1952 or 53 and could actually see the school from my 2nd floor window. Yes, as Dave (as in Ge___L?) says, it was a great place to grow up. I’ve always wondered why they didn’t have kindergarten provided, and theorized that there was a shortage of teachers available during the post-war baby boom going on where women who could worked, and there were too many kids that kept moms very busy. In fact, my street, LaCrosse, at one time had almost 40 children on it! Our church, St. Matthews, used to hold its Sunday services in its basement (the cafeteria) until it built its own building on New Holland Road.