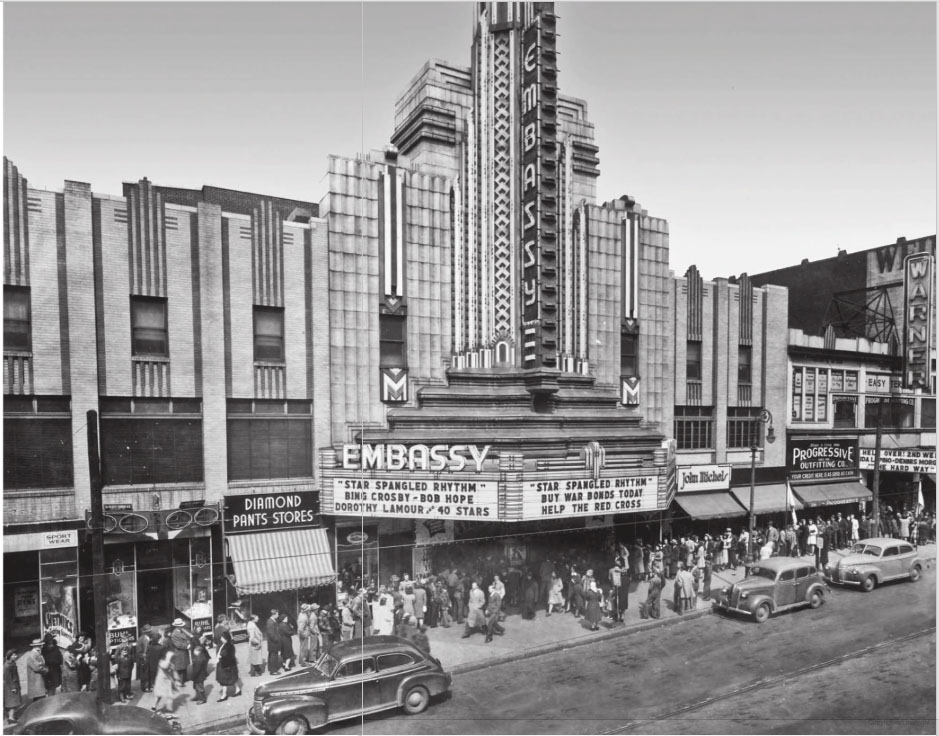 Built on the site of the Empire Theatre. The Embassy Theatre in Reading, PA opened April 4, 1931, with the movie “Stolen Heaven” starring Nancy Carroll. It was owned by Wilmer and Vincent Corp. The Embassy Theatre was designed by Philadelphia architect William H. Lee with his associates Armand de Cortieux Carroll and Charles E. Horn. Dazzling, semi-Atmospheric Art Deco style movie palaces designed by Lee’s firm had opened in late-1930 in Norristown, PA (the Norris Theatre) and in Philadelphia (the Erlen Theatre).

Like the Norris Theatre and the Erlen Theatre, the Embassy Theatre was a movie palace that combined an Atmospheric style with the new decor of Art Moderne and the more lavish materials of Art Deco. Yet this theatre was even more fanciful, and could have been named ‘The Embassy of the Future’. The futuristic design of the theatre appears inspired by Fritz Lang’s “Metropolis” (1927) and the German Expressionist architecture underlying that movie.

The facade was glazed and polychrome Terra Cotta from Conkling-Armstrong of Philadelphia. The oval shaped aluminum ticket booth had carved glass and a marble base. The copper marquee had a glass ceiling. As if it were a rocket, an illuminated lantern topped the 80 feet tall, copper vertical tower! More than 2,000 feet of glass tubing was used for the neon, red neon for letters, and blue and green for the rest.

The lobby’s movie poster frames were set in a wall of black marble. The foyer had copper walls with aluminum horizontal molding and a ceiling of geometric design. Stairs from the foyer led up to the auditorium’s rear loges. A main lounge was on the lower level. Every last detail was Art Deco, including furniture, oval mirrors, drinking fountains, telephone booths, chandeliers and carpet.

The most amazing feature of the Embassy Theatre was in its 2,246 seat Atmospheric style auditorium, which used rolling metal gates instead of a stage curtain! Instead of the curtain, a metal grille with rolling gates was provided from two tons of carved wood, steel track, and steel draperies. Six grille gates with Art Deco style carvings slowly opened in series. The setting represented an aluminum gateway and arch on a terraced lawn. Silhouettes of tall tree tops faintly illuminated in the shadows of the night appeared in the distance.

In place of the usual stage, a green terrace rose from the auditorium floor with stone steps, such as might be used in ascending from a sunken garden to the heights of an upper lawn. On the stage level, shrubbery and ornamental garden benches furnished a screen at the sides.

The auditorium’s side walls near the stage had large columns to accentuate the screen as the focal point. The balcony, side walls and projection booth simulated an outside garden pavilion connected with arcades. Ornamental sea horses were at the balcony pavilions and front. The domed ceiling had a deep blue sky effect curving down behind the garden gates, and with the tall pillars and lights gave the impression of a still greater vista beyond. On the ceiling, stars twinkled, and there were moving clouds.

There was a section for the hard of hearing, with ear phones.

Currently, the DoubleTree Hilton Hotel sits on the site of the former Embassy Theatre.

[…] The Colonial Theatre closed in 1969 and was demolished in 1970 to make way for a shopping mall that was never built. A similar fate awaited its rival and near neighbor, the Embassy Theatre. […]