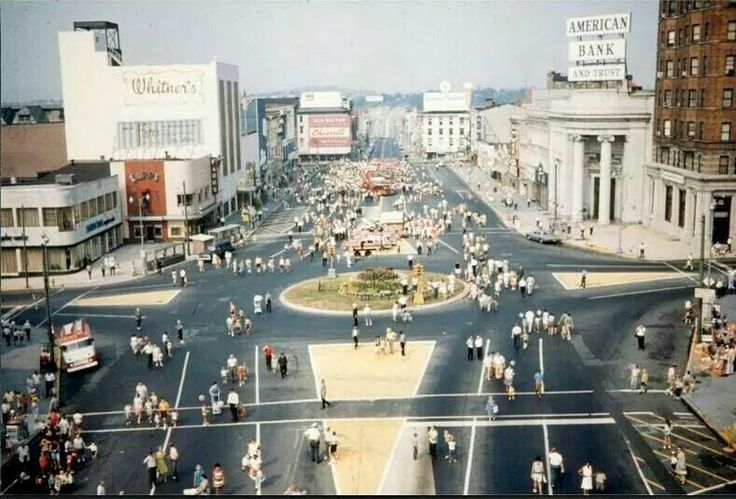 If you hear someone refer to Penn Square in Reading, they are speaking of the 400 and 500 blocks of Penn Street with the center being 5th Street. It marks the center of downtown Reading, which used to be adorned with shops on both sides of the street. Below downtown Reading is pictured in the 1930s, when trollies ruled and the entire street was just open macadam. The center of Penn Square was a traffic circle, and traffic gave way to the trollies that ran North/South on 5th Street and East/West on Penn Street.

By the 50s-early 70s, 5th and Penn continued with the circle but made the area a little more pedestrian friendly. Traffic was directed by lights and police officers.

By the early 70s, big plans were in the works for the Penn Square in Reading. The city demolished almost the entire 600 and 700 blocks of Penn Street to build a massive indoor shopping mall that never came to fruition. They did however go through with the part of the plan that involved turning the entire 500 block of Penn Street into an outdoor pedestrian area. It was completed in May of 1975 at a cost of $1.6 million.

Automotive traffic was cut off completely from this block and had to be re-routed around, which caused the inevitable traffic problems. This was a last-ditch effort to help businesses along Penn Street garner more foot traffic and increase profits as a result. The effort was too little too late, however, as established malls like the Berkshire had already started hammering nails into the coffin of downtown being a popular shopping destination. Perhaps it was inevitable.

Downtown – The downtown continued to provide the top business stories of the year as businessmen within the city as well as surrounding communities made strides to restore the center city as a commercial and financial area. Two such projects are the Penn Square Center shown at right, and the remodeling of the northwest corner of Sixth and Penn streets by the Thomas Brothers – Eagle Photo Daniel J. Devine.

In the 80s, many buildings were developed in the 600 and 700 blocks of Penn Street to fill up the empty space left by the failed mall plans and also to attempt to bring businesses downtown. Penn Square Center was one of those buildings.

By 1990 the city decided that the square needed to be opened back up to traffic and again redeveloped the area, ripping out the pedestrian area. This was completed in 1993 and has remained this way since.

[…] the photographer and the Court house were razed in the 1970s as a part of downtown Reading’s revitalization efforts. Can you identify any of the businesses along the east side of North 6th […]