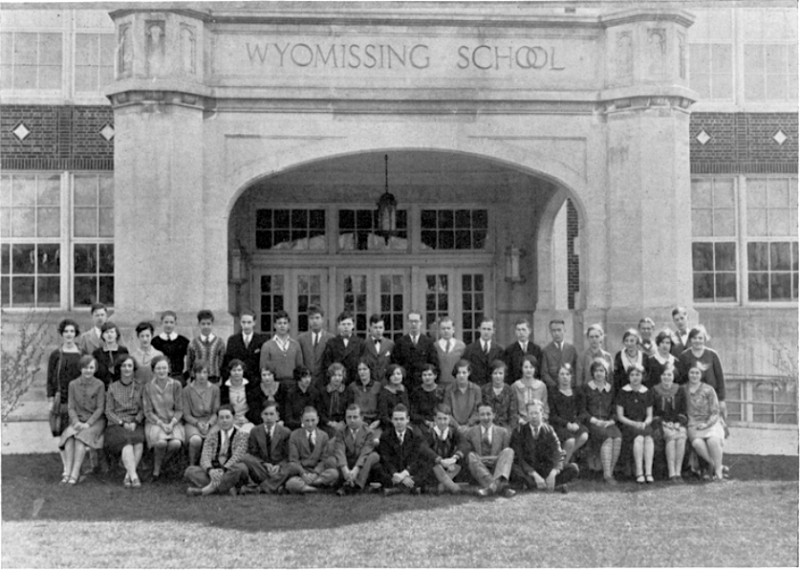 In 1908, the Wyomissing school district was founded, with classes being taught in a private residence. In 1909, the district’s first building was completed on Belmont Avenue. Students attended 1st through 11th grade at the building on the corner of Trent and Belmont Avenues. After 11th grade students had the choice of continuing their studies at a Boy’s or Girl’s High School in Reading or to stop their schooling. By 1922 it became apparent that the Borough had the need for a local public high school, so planning and construction began. The building at Trent and Belmont remained in use as Wyomissing’s Elementary School.

The first Wyomissing High School was completed in 1924 and sat on Wyomissing Blvd in between Garfield and Cleveland Avenues. Finally there was a complete high school education provided by the Borough for the youth of the Borough.

Wyomissing’s athletic identity can be broken into three distinct eras. During the 16 year tenure at the old Wyomissing High building, sports teams were referred to as the Sunsets. After the current high school building was completed in 1940 and until Wyomissing’s merger with West Reading High School in 1969, the sports teams were known as the Wyomissing Warriors. Since 1969 Wyomissing has been the Spartans. The school colors remained blue and white since the 1924.

Construction on the new Wyomissing High School building began in October of 1938 and was completed December 1939. The building was located along Cambridge and Evans Avenues, and was state of the art for its time. The grounds provided a spacious athletic field, pavilion and tennis courts. Surrounding the building were fields, as Wyomissing was not nearly as developed as it is today.

The floor plan of the new building itself was an important improvement over the old Wyo High. It was built with two wings and a central school section which included the office, classrooms and library. Each wing was a complete unit. This arrangement was practical on school entertainment nights when either the auditorium or gymnasium may be isolated for use from the rest of the building.

The auditorium, which accommodated two hundred more persons than the old, had one of the largest high school stages in the state at that time. The colonial design library was magnificent with its sculptured doorways, pillars and vaulted ceiling. Another feature was the new gymnasium which was over twice the size of the former. Wyomissing’s outside decor includes the famous cupola on the very top of the main section of the building. Other new additions were special fitting rooms for the domestic arts classes, a small breakfast nook for teas and lunches, new cooking equipment, and a dark room for developing pictures. There were 10,010,001 bricks used in the construction of the new building, and if they were to be laid end to end, they would reach from Reading to New York City.

During the week of February 20th-25th, 1940, the building was dedicated. The main exercises were held Tuesday, February 20th. Festivities included physical education demonstrations, a school dance, and music concerts by the school clubs. It is estimated that 8000 people toured the building during the dedication week.

A large addition was made to the building in 1965 to accommodate a growing student body. The school was then again renovated in 1994. New additions in 1965 included a language arts laboratory, instructional media center, a large group instruction room, and many more classrooms. In the early 1960s Wyomissing permanently absorbed Wyomissing Hills students. Previous to this, secondary students living in Wyomissing Hills could choose to attend either Wyomissing, West Reading or Wilson High Schools. In 1969 Wyomissing absorbed the students from the West Reading Borough. The district’s boundaries have remained constant for over 50 years since this merger.

You are correct Pete, my source was incorrect, it was in use until 1984

It was the elementary school when I attended, first in 1954 for 3rd grade and then part of 5th grade and all of 6th grade, Mrs. Kestner was my teacher in 3rd grade, Mrs. Engel in 5th, and the principal, Mrs. Nellie Gruber was my teacher in 6th grade, 1957 – 1958. I recall walking in line down to the basement where the gym was and sitting along the wall as practice for a nuclear attack air raid. We also held Boy Scouts meetings every Monday night in the gymnasium. There was a paved court in the back across the road from the Wyomissing playground. The court had a couple of basketball hoops on poles and the bike shed at the back. The court was popular at recess time. After eating lunch, we went across the road (Trent Avenue) to the playground and had “Percy Chases”, named for a fellow classmate, Dick Purselle. The playground had woods on either side (still does), so each side had its own area. We would split into two group and try to catch one another. Some fond memories during my introduction to American life.

[…] property from the 1935 photo. On the top left of the 1935 photo you can also see the back of the Old Wyomissing High School/Elementary School building that sat between Cleveland and Garfield Avenues and faced Wyomissing Boulevard. It looks like the […]