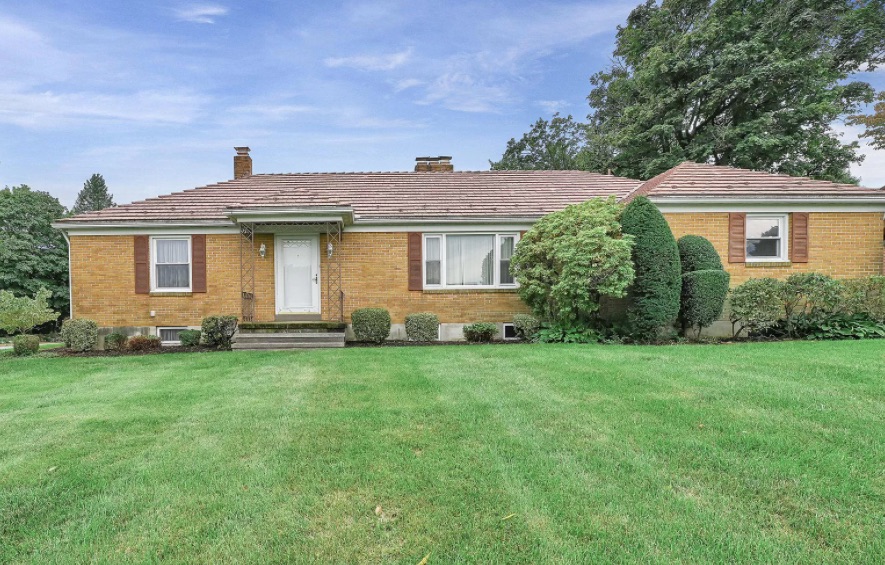 What is nostalgia? A feeling inspired by a place or an image? A fleeting moment where we look at the past as if it was more desirable than the present.

Better? I’m not convinced. Simpler, most definitely. Simpler in the sense that the responsibilities and hardships of adulthood make it seem like a time and place you would rather be occasionally.

To experience nostalgia there has to be loss. Somewhere along the line we let go of the those things that once inspired great joy within us. A piece of ourselves we can never really return to.

My Grandmother’s house finally hit the market and sold. It is the last hurdle in the 9 month process of handling her estate. Closing is a week from today. I have written a few posts now about the emotional toll losing someone unexpectedly has taken on me, and I promise, this will be the last. My story is not unique but it is mine to tell.

The house you are excited about making your own was built in 1956. (Not ’46 like the listing says, of course I did the deed research) My Grandparents bought the place in January 1973 from the man who built it. His name was Byrl Kline. Those reading might be familiar with the name as he owned a car dealership on Penn Avenue in West Lawn for the better part of the 50s and 60s.

Do the math and you will see that it has been in my family for very close to a half-century. Though my memories of it only go back half of that time period. I could tell you a million anecdotes but I will limit myself to a few.

Us grandkids ran barefoot around that yard every summer for our entire adolescence. My only advice is to shoe up near that huge, beautiful holly tree out front. Those spiked leaves are always on the ground regardless of season, and man do they hurt.

If we had a nickel for every pinochle game played in that kitchen over that half century we probably could have afforded to just turn the place into a personal family museum.

The announcers and cheers at the baseball games at the Owls Field right behind the yard were background noise to our night swims. On the back half of the lot you can still see the darker grass outline of where a circular above-ground pool stood for most of that 50 years. The nocturnal bats would swoop down to get a drink while we were in it which would result in incessant screaming. Actually, maybe our shrieks were background noise for the poor souls at those baseball games.

At some point a squirrel made it’s way into the basement via the fireplace chimney. It took several grown men with various rackets to “solve” that situation. No, the squirrel was not harmed. At least that’s what we were told.

The back yard was once fully shaded by nearly twenty mature trees. That may be hard to believe considering none of them remain thanks to various storms, tree diseases and general tree lifespans. We used to climb the smaller ones that stood on either side of the outdoor fireplace. Yeah, they were under the power lines. No, it probably wasn’t the best idea.

While nostalgia has a way of rose-tinting our glasses, I won’t goad you into believing that all times were good times. As any home does, those walls also saw some really hard times.

I know the cracks in the patio like lines on my own palms and the creaky basement toilet door is a unique sound forever etched into a dusty corner of my brain.

Good and bad, it will always be a part of me.

I broke off my first real relationship in that breezeway between the garage and kitchen on a summer day after freshman year in college. Like now, it felt like that was the end of my world as I knew it. To an extent I suppose it was.

Yet somewhere along the line immature teenage love gave way to finding a man who would become my husband and father of my children.

Ones perception of love, like time, changes and grows in ways I wasn’t aware it could back when the hot summer air dried my tears over the boy in the breezeway.

One day you wake up living a life a young version of yourself wouldn’t necessarily recognize. The transitions are gradual. It is so very comforting to look back; but I try to remind myself to keep moving forward. There are new memories to make, new stages to experience, and more life to be lived.

All I ask is that you love the house like she did; like those of us who loved her still do. It is so very hard to let go of this place and every moment I have attached to it’s light brown brick walls. The best way I can think of to ease this pain is to see new people make beautiful new memories within them. I know I won’t ever be able to roll down that block of Reading Boulevard without reminiscing about mine.

P.S. Sorry I haven’t posted a lot of content lately, I have been…busy

Hello Alexa: I wondered why I hadn’t seen your posts for a while . . . but the picture gives good reason why you were busy. Best wishes. Jake

Thanks, Jake. Dont worry, I’ll be climbing back on the nostalgia horse soon 🙂

This story brought tears to my eyes

Enjoyed this article immensely. It hits “home” because I am just finishing cleaning out my parents’ home, as my father is now in a nursing facility. It has been our homestead since 1968 so it is indeed difficult to “let go”.

Sorry to hear you are familiar with this feeling, Bill. It’s just the emotional price we pay for having a great upbringing. Worth it, though. Thanks for reading.

Beautifully expressed sentiments and very relatable, even to an old guy like myself. My first 8 years were spent on Lincoln Avenue- only a block away from that Owl’s field I spent so many hours playing ball and adventuring on – dodging old man McCallum and his self-appointed task of ridding the field of local urchins. The feelings you projected about your grandmother’s house and the experiences you lived through are things that will live in your memory always. Nostalgia for rank sentimentalists (like myself) is a good thing – it gives us pleasure to remember what was good in our lives when we were very young. It is not “living in the past,” but rather paying tribute to those ‘building blocks’ of our development. Thank-you, Alexa for the great work you’ve done on this site and your fascinating personal insights!

Thanks for sharing your memories. I love hearing memories of that area because it has and always will be “home”. You are right, feeling such a loss only means that we had something great and it always will be. I too am a sentimentalist, clearly. Thanks for being a regular reader.