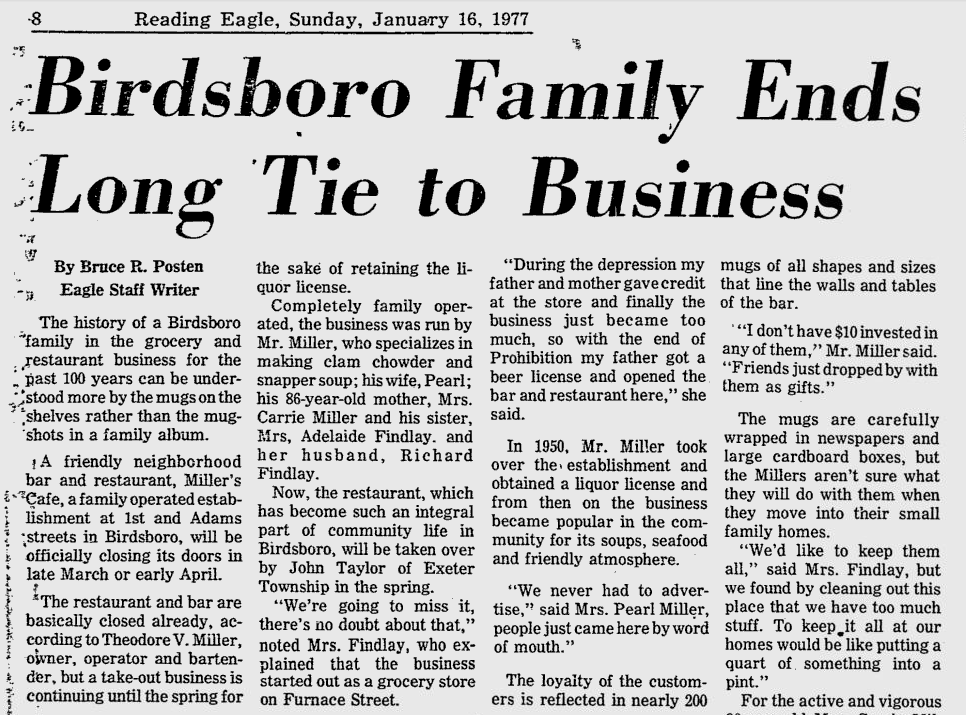 Warm Inside – The steps are icy, but the welcome was always warm in the Miller’s Cafe in Birdsboro. The business grew over the last 100 years from a grocery store, which sold homemade ice cream and roasted peanuts, to a bar and restaurant that specialized in soups and seafood. – Eagle Photos

Miller’s Cafe was a restaurant and bar that operated for over 100 years at 1st & Adams Streets in Birdsboro. It was a family business, started as a grocery store on Furnace Street. It was opened by Theodore Miller’s grandparents, and was sold by him in early April of 1977. It survived the depression but was turned into a restaurant and bar after prohibition ended to try and make up for lost revenue. They specialized in soups and seafood, and the establishment hosted many community gatherings during its tenure.

The history of the Birdsboro family in the grocery and restaurant business for the past 100 years can be understood more by the mugs on the shelves rather than the mugshots in the family album.

Friendly Reminders – Miller’s Cafe, a family operated bar and restaurant in Birdsboro, will be officially closing this spring. From left, Mrs. Carrie Miller, Mrs. Adelaide Findlay, and Theodore V. Miller are surrounded by mugs that were given to the Miller’s as gifts by patrons.