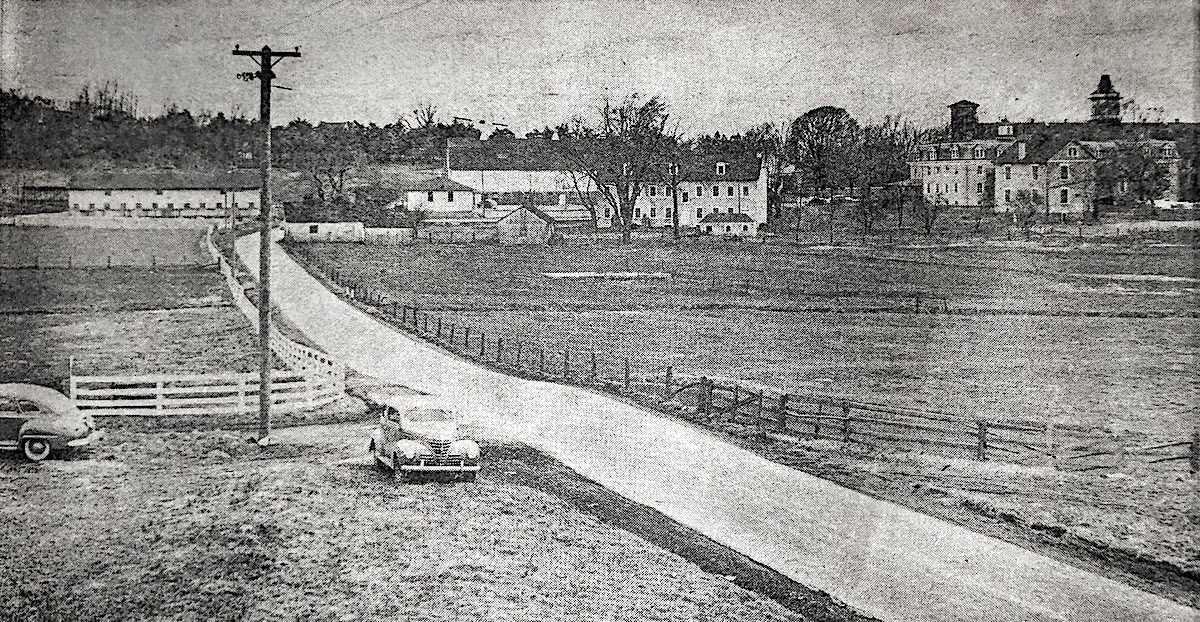 The Berks County Almshouse opened officially in 1826, when a state law was passed requiring every county in the state of Pennsylvania to have a “poorhouse”. The world alms is defined as giving to others as an act of virtue in the form of charity or donations. This complex was one of the earliest examples of a social welfare system in our modern American society. The destitute, mentally ill, sickly and elderly would be sent here to live. The almshouse did its best to be self-sufficient, with the people inhabiting it performing tasks such as planting and cultivating crops, cooking and maintaining the premises.

The almshouse complex was made up of 6 primary buildings and many other smaller buildings like a chapel, creamery, bakery and slaughterhouse. The entire complex sat on 514 acres of land, 434 of which was for crop cultivation and 5 used for various other food and pleasure gardening. Over the course of the 130 year history the complex included quarters for the financially destitute, hospitals for the sick and elderly, and a mental hospital. All of these branches were segregated into male and female sections, with cohabitation between the sexes never occurring.

By the mid-1900s the complex became more focused on elderly care than caring for the poor and mentally ill. The methods they used to deal with the mentally-ill or challenged at the Almshouse (and all establishments like it during the 19th and into the 20th century) were particularly heinous in comparison to today’s standards. For some the almshouse was a blessing, for others it was a prison.

The complex had its own cemetery, called Potter’s Field, which was the burial grounds for those who passed at the Almshouse. When the land was redeveloped in the late 1950s, the unmarked graves and remains of the long forgotten were accidentally unearthed by unknowing construction workers.

In 1952 the outdated Berks County Almshouse buildings were replaced with a new modern elderly living facility in Leesport called Berks Heim. Berks Heim is currently still in operation today as a county-run nursing home, though has had some financial trouble recently and was almost sold. The same year Berks Heim opened the Berks County Almshouse was closed and sold for $425,000 to developer W. Marshall Hughes and Son, Inc. Their plan was to redevelop the land into apartment housing, a shopping strip mall, and the then-new Governor Mifflin High School. The Almshouse complex sat vacant for five years and was demolished in September and October of 1957.

With traces of the old Berks County Almshouse near Shillington still remaining (foreground), workmen proceed with construction of an apartment house in the background. The rubble is all that remained last week of the institution which served Berk’s County’s poor and mentally ill for more than 100 years. It has been replaced by modern Berks Heim in Bern Township.

Today, you can still find some traces of the old Almshouse hanging around the former site. Along route 724 there is a stone wall that wraps from Shillington Church of Christ west and back a private drive behind the Mifflin Park apartments. Also, a stone marker sits along Mifflin Boulevard, right in front of where to old main building sat. The marker has been missing its plaque since sometime in the early 2010s when it mysteriously vanished.

Trying to figure out where this was. Mention of a “shopping strip mall” that was planned. Was it ever constructed, and if so, where is it?

The main building was roughly here:
https://maps.app.goo.gl/UggssiwwrVfUWqsi9
The entire property was 500 acres though. It spanned between Lancaster Ave and rt 724. The Shillington Shopping center was built and is still there. There’s been housing developments, apartment buildings, more schools and churches built on it since 1957

Thanks! Well, that’s what I wondered, and I thought it might be the Shillington Shopping Center, but I couldn’t place it on the map, re: “Philadelphia Avenue” and “Route 724”. I guess I didn’t realize that Route 724 and Lancaster Avenue were one and the same – at least for a stretch.

yep, they split just up the road from where this was. That’s where 724 turns into “Philadelphia Ave”

I just discovered while doing genealogy that my 3x great uncle, Benjamin Anderson was the steward of the Almshouse from 1875 to 1883, so I found this additional information about its history fascinating. Thanks!

My Great-Great Grandfather, Silas W. Fisher was steward of the alms house from at least 1870 to 1875. The 1870 census lists him as the steward there and I have an article from the paper dated May 12 1875 that mentions him. His obituary says he was the steward from 1870 to 1878 but don’t know if that’s accurate.

Thanks for this, very interesting! There is an image of the almshouse from the late 19th century on the National Gallery of Art website, https://www.nga.gov/collection/art-object-page.42420.html (the artwork is public domain so I have attached it).

The view is to the west, roughly from the corner of New Castle Drive and Philadelphia Avenue. The road along the left side with all the traffic is now Philadelphia Avenue. The main road that bisects the image from left to right is Mifflin Boulevard. The entrance to the main building is just south of Brobst Street, where the marker with the new plaque is located. The surviving retaining wall is along Philadelphia Avenue at would be roughly No. 333 if there were an address there. As it turns to run north-south, it marks an extension of Butch Bare Lane.

It seems that some of the surrounding farmland also belonged to the greater county complex, extending perhaps as far east as New Holland Road and also including some land on the south side of Philadelphia Avenue, perhaps as far south as Broad Street. The western boundary appears to have been Butch Bare Lane. Judging from the topography, it looks as if the southeast corner was at Cedar Top Road and Mansion Drive.

There is one other part of the almshouse complex still visible today: the cemetery, which is on the west side of Cedar Top Road at Rick Road, south of Philadelphia Avenue. There is an ornamental gate marking the spot, bearing the words “POTTER’S FIELD”. https://www.findagrave.com/cemetery/2435024/berks-county-almshouse-cemetery 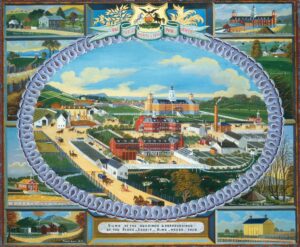