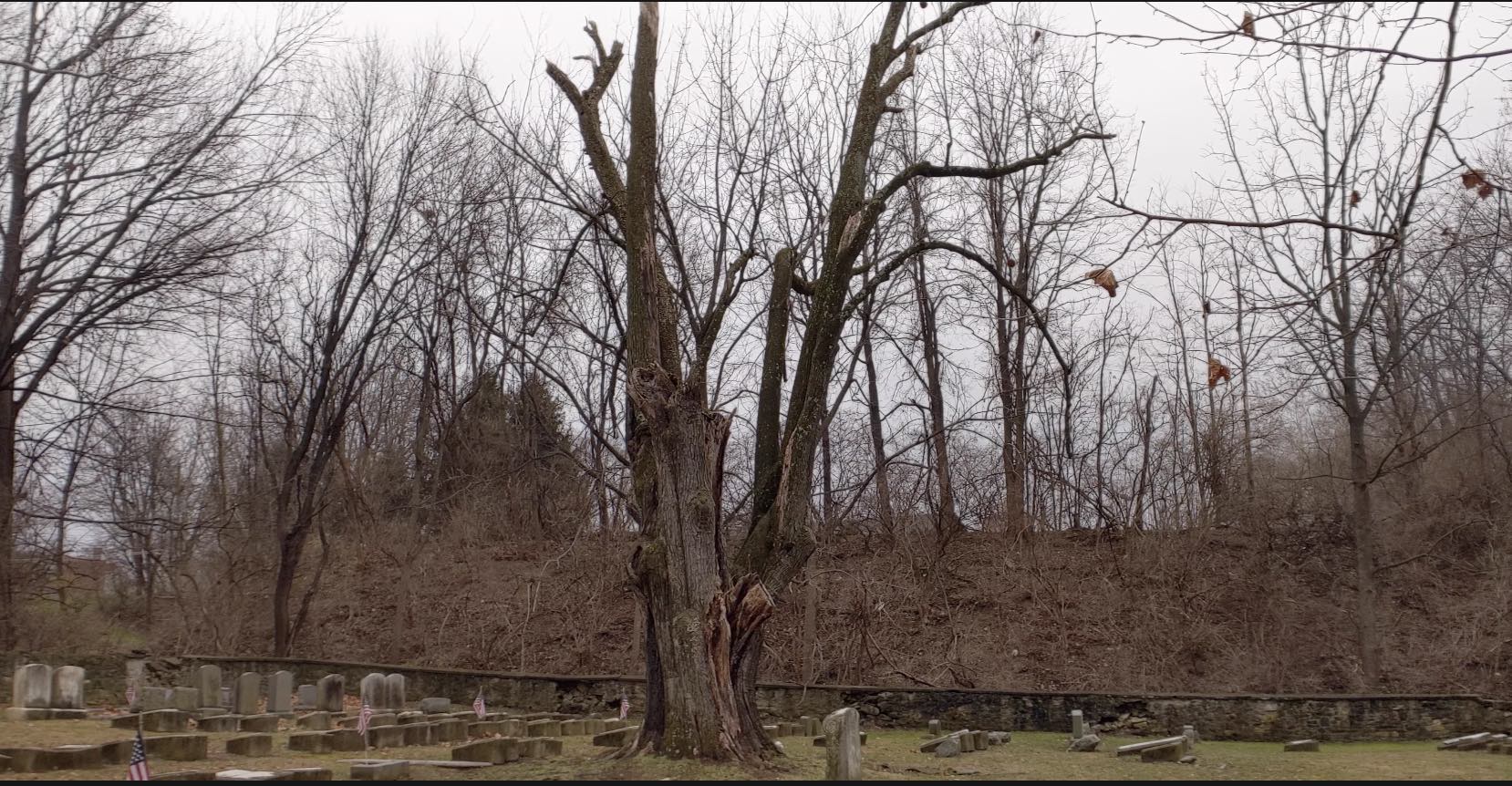 Tucked into a hill in West Reading is a quiet little cemetery that few know about.

Bernhard Adam Cemetery was established in 1744, making it one of the oldest in Berks County. Originally on the site was also a small stone meeting house, allegedly the oldest of its kind in Berks. It served as a school house and a funeral chapel. The white birch tree visible on the side of the meeting house in the below 1930 photographs is still standing today, and its impressive size can be seen in the video above. Only ruins remain of the meeting house itself.

As far as I could see from looking at the gravestones, the most recent burial here happened in 1997. A vast majority of them seemed to have occurred in the 1800s. Amongst the graves are one Revolutionary War veteran, five Civil War Veterans, and two War of 1812 veterans. Someone, likely the local VFW, is still placing flags at their graves, and the grounds appear to be maintained.

There were issues with vandalism here in the early 1980s, which is why all the original stones are embedded in cement and on their sides. Various restorations since the mid-20th century have been privately funded endeavors. There was a trust established by a descendant named Lucy Davis who was buried there in 1949. Thanks to the degradation that comes with time and the destruction by angsty teenagers, that money ran out long ago. It is unclear who manages the historic cemetery today. The land is tax-exempt, but someone is cutting back overgrowth and keeping the area presentable.

As of the last reported vandalism in 1981, the Welsh Society of Berks County was in charge of the upkeep, but I have been unable to find any information on if this organization still exists let alone maintains the burial ground.

The man for whom the cemetery is named, Bernhard Adam, bought the property in 1798 for the equivalent of $300, which included a 5 1/2 acre tract on which the cemetery resided. He was buried there after his death in 1810.

One legend surrounds the grave of Bernard’s son-in-law, John Schwartz, a War of 1812 Veteran who managed to die five years before 1812. The story of his death is that he arrived at the Sheep Mill Ferry one night too late to catch the last crossing and slept in a nearby barn. The next morning, he walked out of what he thought was a door, which was unfortunately a chute out of the second story. The fall broke his neck.

A 1959 Reading Eagle article states the earliest gravesite at the cemetery belongs to a David Lewis, who died in 1754 at the age of 50.

Originally, the legend was that Lewis, who was a resident of the White House Hotel near what became the Reading Brewery site, was found in the Schuykill River tied in a woman’s slip attached to a weight. However, the story was later set straight by a descendant; Lewis had charge of the ferry which crossed the Schuylkill River where the Bingaman Street Bridge now stands. He was killed when thrown overboard after the rope was broken.

Next to the right-of-way that leads back to the cemetery is an old stone home that sits at 1010 Old Wyomissing Road. This home was built in 1875 and was likely the only thing near the cemetery until the immediate area was built-up in the mid 20th-century.

I filmed the above video on a gloomy December 30th, and in the distance the looming Reading Hospital was visible, struggling under the load of a pandemic surge. The air was palpably thick with humidity and a touch of dread. However, I found this place inexplicably peaceful. I can’t help but imagine what the landscape around this little burial ground looked like when it was new; decades before the chain of events leading to our country’s birth.

Thank you for your History Insights; I truly appreciate your work!

Happy New Year to you! Thanks for this both interesting and poignant article & video. I can’t wait to explore the cemetery when I actually find it. And thank you for you continued interest and many efforts in exploring and sharing the history of Berks County to us all.

I think that area is Wyomissing,, not
West Reading.

Cemetery is definitely not West Reading. Either the city or Cumru Township

Very nice bit of Berks History and I too, thank-you for your efforts, Alexa. Never seen this, but I am interested in tracking it down.

Looking at its map location, so close to Thomas Ford – it’s technically in Reading, but obviously right next to West Reading proper.

Where is this at. It showed my family’s tombstone. Would love to go see it