Stoudt’s Restaurant was located at 602 Penn Avenue in Sinking Spring (now the 4000 block and a parking lot). It was opened in 1951 and owned by Edward and Ada Stoudt. Edward’s son, also named Edward, worked for his father starting in 1960, and eventually split off and opened Stoudt’s Black Angus; which is still a successful business on North Reading Road in Adamstown.

Stoudt’s was known for it’s PA Dutch Country cooking. It closed in 1973 after 22 years, and the building was demolished to create a parking lot for St. John’s Reformed Church across the street. 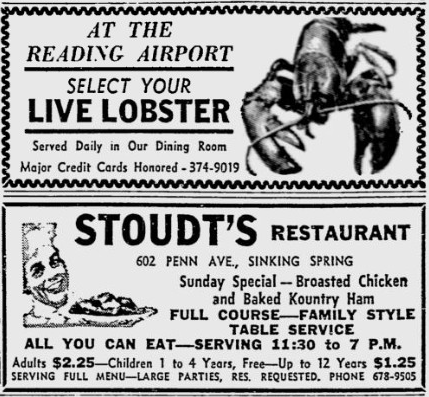 Have content that you want shared to this page? Have information or stories to share?
Any questions/concerns/inquiries please email me at [email protected]

Share this ArticleLike this article? Email it to a friend!
Email sent!